Walleye still on move, but closer to islands 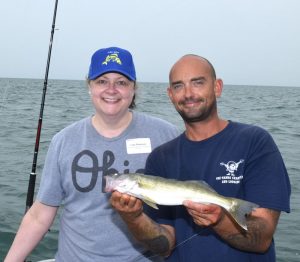 The walleye are still east and west of the Lake Erie Islands, but fortunately for Port Clinton area anglers, the schools of hungry young fish have lately been moving closer to the islands.

The walleye seem to be returning to their June patterns we usually see this time of year. Instead of the schools of walleye being 10 miles east of Kelleys Island, they are now only four to five miles away, feeding along the Canadian line.

Walleye are also showing up in the reef areas just west of Port Clinton, in the deeper waters out by F Can, just to the west. Casters have enjoyed a good week with limit catches.

At the beginning of the week the schools of walleye were being caught east of Kelleys Island. By the end of the week they were closer to the islands. Weapons, which are small spinner rigs baited with a piece of nightcrawler, were the way to go on nice days with a 1-ounce barrel sinker.

When the winds kicked up, bottom bouncers were used with a 3-ounce to 4-ounce weights. The best spots for catching walleye have been up on the Canadian line about four miles east of Kelleys Island and northwest of Kelleys Island.

Fishermen who were out trolling the deeper waters did as well as the casters, heading four to five miles east of Kelleys Island. Tru-Trip diving planers and worm burners are what they have been trolling. Set those rigs 85 to 100 feet back for best results. Speeds of 1.9 to 2.2 miles per hour have been working best.

Anglers around the area are still talking about the other species of fish that are also filling coolers. Catfish have been plentiful in the Sandusky Bay area. Uncooked shrimp are the prime bait of choice and have been for a few years. So much so that we have started keeping bait shrimp in stock at Bay’s Edge Bait and Tackle.

The yellow perch bite has remained slow, with some fair catches being reported in Sandusky Bay. Hopefully, by the end of July we will begin to see more good catches of perch. Shiner minnows have begun to show up in the marinas, which is very encouraging for perch fishing.

Some fisherman have also started fishing for smallmouth bass lately. They have been getting good-sized bass around the Lake Erie Islands in 16 to 18 feet of water. Artificial baits, such as tube jigs, drop shot rigs and small diving plugs, are taking lots of bass. Soft craws are the bait of choice for smallmouth bass.

So until next week, get out there and fish!