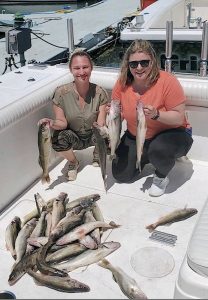 The walleye explosion on Lake Erie has continued this week, with limit catches luring anglers from around Ohio and the country to the Walleye Capital of the World.

The time to go west is now as Lake Erie walleye catches continue to be at historic levels. The majority of the fish and — and successful fishermen — have been “straight up the middle” between Kelly’s Island, South Bass Island and Middle Island.

There is a huge school of fish there, but now the walleye have shifted their pattern and appear to be closer to shore. About three miles out of East and West harbors, in the waters around Starve Island and American Eagle Shoal, anglers have reported excellent fishing.

Those anglers that are choosing to cast 1-ounce Weapon-style spinners with a single hook. Usually we make this switch from double hook to single hook when the mayflies start to appear, and the mayfly hatch is just around the corner.

The walleye have been staying near the surface and down to about 15 to 20 feet. As of Sunday night, when I was writing this article, we went west of D Can where there was a massive school of fish that were starting to bite well. West of the islands, boaters are going to be able to spread out more now.

At Bays Edge Fish Cleaning, Misty is reporting record catches of walleye. Many guides are casting and enjoying amazing success. Trollers have switched from crankbaits, or diving plugs, over to No. 40 Tru-Trip online diving planers and a variety of spoons with great success. Trolling speeds of 2.0 to 2.2 miles per hour have been best west of Catawba and south of Green Island.

The catfish bite has remained the same this past week around Sandusky Bay. Raw shrimp continue to keep the catfish biting, while nightcrawlers have remained the favorite live bait. Smallmouth bass are in a catch-and release mode right now, with outstanding results in 16 to 18 feet of water.

As a bonus for walleye fisherman, the casting success that usually takes place in the fall has been producing consistent limit catches because of the abundance of fish. From private boaters to charter boats, limits of walleye are consistently being caught.

As a Port Clinton business owner, my staff and I are happy for all the fishing success we have seen the last few weeks. Port Clinton is the Walleye Capital of the World, with a reputation that can’t be matched. Until next week, be safe out on Lake Erie and don’t forget to keep a tight line!