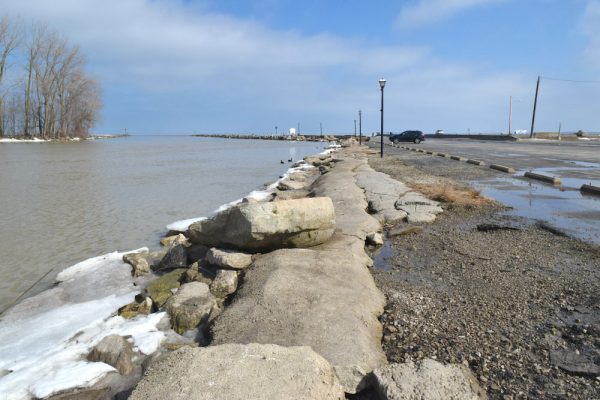 The Waterfront Walkway on the east bank of the Portage River in downtown Port Clinton is finally going to begin this year. Bids on the $1.9 million project are expected to be put out in the coming weeks and the work could start in late summer. (Photo by D’Arcy Patrick Egan)

Port Clinton has been a small city with big ideas of late, and many of those plans are coming to fruition. As the downtown area continues to evolve, with Madison Street retail renovations in the works and The Art Garage opening on West Perry Street, Port Clinton City Council has given the green light to the long-sought Waterfront Walkway on the east bank of the Portage River.

The Mannick & Smith Design Group of Shaker Heights, Ohio is handling the project, funded with a $1.9 million grant from the Ohio Department of Transportation’s Transportation Alternatives Program. Bids are expected in the coming weeks, and construction could begin as early as late summer, said Safety-Service Director Tracy Colston.

“This is going to be a great project for the city,” said Colston. “It will make for a very attractive area on the Portage River, and provide parking and access to the Lake Erie beach, Waterworks Park, the Port Clinton Lighthouse and Derby Pond.”

While the popular parking lot on the Portage River may have to be closed, at times, it will only be for a day, or so, when that happens, said Colston.

“We are thrilled to see the expansion of Port Clinton’s existing trail and walkway system,” said Richard Norgard, president of the Port Clinton Lighthouse Conservancy. “It will take full advantage our waterfront and create an even more enjoyable experience for visitors and residents alike.”

The Waterfront Walkway will connect to the walkways around the Port Clinton Lighthouse and Derby Pond, said Colston, as well as the Lake Erie Love sign and Lake Erie beach front.

“There has been an enormous amount of cooperation and partnership in the planning stages,” said Colston. “We’re still putting all of the pieces together, but we are moving forward.”

Port Clinton will be seeking a $1 million ODOT Transportation Alternatives Program grant to construct a walkway along Lakeshore Drive. It would stretch from the Portage River Lift Bridge westward to the former Moose Lodge property, a pleasant stroll or bike ride along the Lake Erie shoreline for residents and visitors.

Just as importantly, the walkways would protect the downtown infrastructure from flooding and other damage caused by shoreline storms and inclement weather.

Colston said the downtown projects that are in the works and enhancements to the Meals on Madison (MOM) entertainment and eating area in the 100 Block of Madison Street will give the city a boost.

“We’ve been able to enhance the city’s views of Lake Erie, and the wetlands project (east of Derby Pond) will provide a new look to the area after we begin planting seeds this spring.”

Whether Waterworks Park will be able to host events that were cancelled because of the Covid-19 pandemic in 2020 remains to be seen. Some feel there is a good chance for the return of the Walleye Festival on Memorial Day Weekend and the Rock the Light Music Festival in mid-September. This week, indoor and outdoor sporting and music events in Ohio have been permitted with reduced attendance by state officials.