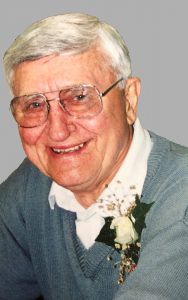 Wayne Marvin Lieske passed away peacefully on Wednesday, Oct. 13, at Spring Creek Assisted Living in Green Springs with family at his side. Wayne was born on Sept. 6, 1926, in Ottawa County, to Fred and Alma (Franck) Lieske. He married Marie Meacham of Port Clinton at St. John Lutheran Church in Oak Harbor. They celebrated their 65th wedding anniversary months before Marie’s passing in October 2016.

Wayne served in the U.S. Army as a drill sergeant, helping train troops during the Korean conflict. Following his service, he became a steamfitter apprentice and a member of Local 50 in Toledo. Wayne worked his way to foreman, managing projects around northwest Ohio during his many years with Warner Mechanical in Fremont. He was a respected and successful project estimator for Warner, even following his retirement.

Wayne was active in his faith as long as his years allowed. He participated in many activities early on at Emmanuel Lutheran near Hessville, followed by Grace Lutheran in Fremont. At Grace, he served as Church Council member, Property Committee chair, Sunday School teacher, and Sunday School superintendent. He also worked on several church renovation, restoration, and maintenance projects.

Wayne greatly enjoyed sports. He was a loyal fan of the Ohio State Buckeyes as well as the Cleveland Browns and Guardians. He enjoyed playing golf and was proud of the hole in one he shot at Thornwood several years ago. He was also an avid Jeopardy follower, making what was happening on that show the subject of fun evening phone conversations with his girls and their husbands.

Wayne was the loving father of five daughters: Karen (Brian) Fiske, Kay (Dale) Reiter, and Kathy (Kenny) Franks, all from Fremont, Kim (Joe) Buti, Lakeside-Marblehead, and Karol (Greg) Rippberger, Strongsville. He was grandfather to 9 grandchildren and 19 great grandchildren. Wayne is survived by sister Darlene Goldstein and brothers Ronald (Marian) Lieske, Clark (Marilyn) Lieske, all of Oak Harbor, and Dale Lieske, Athens, Ga. Preceding Wayne in death were his wife, his parents, and several sisters- and brothers-in-law.

Due to COVID concerns, a private service and burial are scheduled. Wayne’s services will be posted on his obituary page for friends and family to watch on the funeral home’s website after services have taken place. Instead of flowers, the family asks that contributions be directed to; Heartland Hospice, 907 W. State Street Ste. A, Fremont, Ohio, 43420, Ballville Cemetery Board, 2220 Tiffin Road, Fremont, Ohio, 43420, Wounded Warrior Project at: support.woundedwarriorproject.org, or to a charity of donor’s choice.

Wayne’s family sends a sincere thank you to the Heartland Hospice nursing staff, social services, and ministry for the comfort and care they provided and for being at his bedside always.

Herman-Karlovetz Funeral Home & Crematory, Fremont, has had the honor of assisting the Lieske family through this difficult time. To express online condolences or to watch Wayne’s services, please visit: www.hermanfh.com.