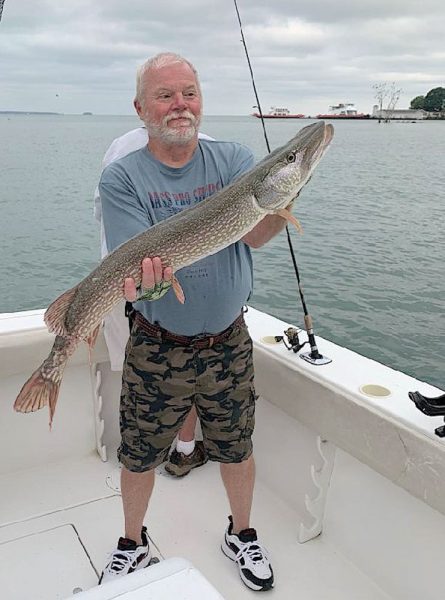 Lynn Walker was hoping for a trophy walleye recently while fishing with Capt. Gary Hopp of Trophy Hunter Charters. Instead, the truck driver from Greenwood, Ind., who is a regular on Hopp’s boat, hooked and landed a 37-inch northern pike on the south side of Kelleys Island. (Photo courtesy of Gary Hopp)

The wind and weather both continue to dictate fishing. The weather has been determining where and how we are fishing for both walleye and yellow perch. At the beginning of the week it was hot, humid and windy, and the last three days was just windy. The good thing was that the walleye fishing was not affected.

The annual Demeter casting walleye tournament had their practice fishing day on Monday for the tournament on Tuesday, and 28 boats were ready and raring to fish. Many of the boats reported large numbers of walleye.

Port Clinton is known as the Walleye Capital of the World for a reason especially when you are casting for them. All week long the anglers that were casting had excellent success. Most casters have been using Weapon-style lures with 1-ounce to 1.5-ounce weights on them. The best areas have been west of Gull Reef, three miles west of Kelleys Island up to the Canadian line, and the Huron dumping grounds. Most of the walleye have been near the lake bottom to half way to the surface. Start from the bottom and work your way up.

Perch, overall, were hitting good all week, especially at the beginning of the week. Southwest of Green Island about a mile and around the A, B, and E cans provided the best catches. Limits were being caught early and mid-week. After the winds Thursday, A, B, and E cans were the best places. Sunday though, with northwest winds, the perch fishing slowed down. Hopefully within a day or two the perch fishing will be back to normal. The smaller goldies seem to be working better than shiners. The shiners are still large in size right now.

As I have said for the last few weeks, the catfish bite is on fire. More and more catches and bigger fish have been coming in. The bay side, east of the railroad bridge. is starting to get hot. Fresh uncooked shrimp is still the best bait to use.

There have been a few reports of smallmouth bass being caught in 16 to 18 feet of water.

Its looking like it’s going to be a good weather week for fishing. In closing, I just want to say that it’s been a great year so far for casters on Lake Erie and for the Port Clinton area. It truly is the best place to be for catching walleye.

Get out there on the lake to have some fun by dropping a line in the water!