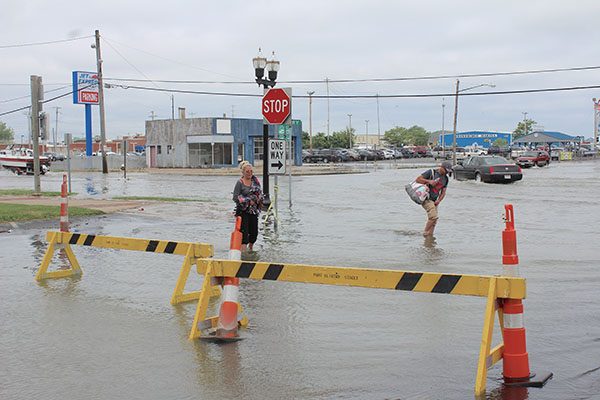 The downtown streets of Port Clinton have suffered from the record high water on Lake Erie and in the Portage River this summer. (Photo by Kathy Jo Schweitzer)

A change in the weather prompted a splurge in business for new owners Roy and Heidi Bemiss at the Great Lakes Popcorn Company on North Madison Street on Saturday, with the pools and puddles that have plagued the street finally going away — at least for a couple of days.

Some thought city crews had finally figured a way to stop the downtown flooding, but that wasn’t the case. It was a gift from Mother Nature, said Port Clinton Safety-Service Director Olen Martin.

“Thanks to a wind change, the Lake Erie water levels went down a bit and the area began to dry out,” said Martin. “We’re still working to find a permanent way to mitigate the high water issue.

“We’ve been doing subterranean testing over the last week, and are busily making plans to handle the high water. We won’t be able to execute any of the plans until the weather conditions allow us to,” he said.

The high water has been a problem since early May, said Yuhasz, who sold the Great Lakes Popcorn Company to Bemiss a few months ago, but still owns the building.

“It’s not just my buildings and this business,” said Yuhasz. “Every business on North Madison Street has been severely impacted by the high water.”

Manager Mark Wolfe and Capt. Eric Langermeier at Fishermen’s Wharf on North Madison Street said the high water has made life very difficult for the popular downtown fishing tackle shop and party boat headquarters. While the outstanding Lake Erie walleye fishing has helped to temper their disappointment, the flooded streets have affected the overall business.

Bemiss said that customers have been loyal, and business is brisk on the weekends when the street is dry, but overall revenues have declined about 40 percent.

Yuhasz pointed out that his sturdy building and lots of sandbags have kept the floors dry at the Great Lakes Popcorn Company, but it requires constant attention.

“Because of the winds, the flooding can happen in just 20 minutes,” he said. “And it can also go away in a very short time when the winds shift.”