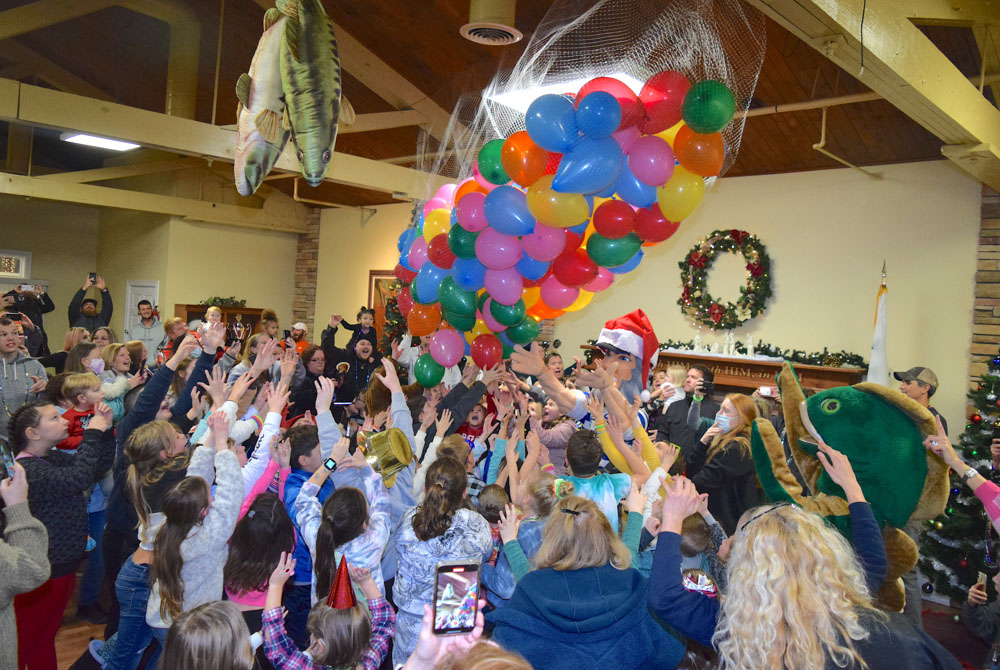 An excited crowd of boys and girls clamor for a colorful school of “minnows” to drop from the ceiling of Denny Bergman Hall on New Year’s Eve at the Port Clinton Knights of Columbus Center in downtown Port Clinton. (Photos by D’Arcy Patrick Egan)

The 25th annual Walleye Drop was a rousing success on Friday night in downtown Port Clinton as thousands crowded Madison Street to welcome the city’s internationally-known favorite fish as Wylie Walleye dropped in for the arrival of 2022.

“This was the biggest Walleye Drop celebration ever,” said a smiling Kristina Tilson, chairman of the Wylie Walleye Foundation that has had volunteers planning the event since last year’s live gala was KO’d by Covid-19.

“Madison Street was packed with revelers at midnight all the way to The Island House and McCarthy’s Irish Pub down the street. DJ Hondo and Zach B on the Walleye Drop stage had everyone dancing,” said Tilson.

Spreading out the New Year’s Eve celebration throughout the area was the 3rd annual Bar Swim, a fleet of four luxury buses providing a free, heated ride on a loop to nine area bars before heading back to Port Clinton for the Walleye Drop.

The Wylie Walleye Foundation’s mission is to promote the year-round family and adult-friendly recreational opportunities Lake Erie provides to residents and visitors of Port Clinton, Catawba Island and the Marblehead Peninsula through marketing, monetary support, and event coordination, said Tilson.

“The great weather on Friday also helped a great deal in getting people to come out for the evening,” said Tilson. “It was the warmest Walleye Drop ever.”

Former Walleye Drop chairman Don Clemons agreed, pointing to a lack of wind that made their job of dropping the 20 foot, 600-pound walleye from a large crane at midnight far easier.

”When you’re trying to wrangle a fish of that size, wind is your enemy,” said Clemons, with a laugh. “This time, we could leave Wylie up there for a few hours.”

Following Wylie’s plunge, a fireworks show over the Port River was the coup de grace.

In downtown Port Clinton, the bars and restaurants were extremely busy.

“The bars hosting people on the Bar Swim loop reported they were also very busy, too,” said Tilson. “Normally, many of those bars would be closed at this time of year.”