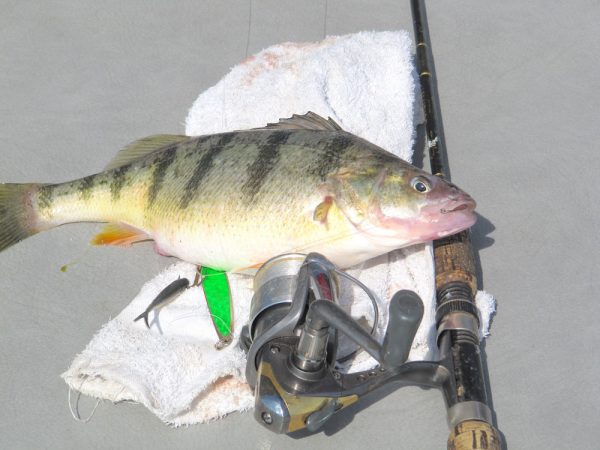 The Ohio Division of Wildlife has struggled to manage its schools of Lake Erie yellow perch in the face of commercial netters and a dwindling number of sport hook-and-line anglers. (Photo by D’Arcy Patrick Egan)

The amazing spawning success of Lake Erie walleye in recent years has vaulted the fishery into the most productive walleye lake in the world. The failure of yellow perch to follow suit, especially in the deeper waters of the Central Basin of Lake Erie, continues to puzzle Ohio Division of Wildlife fisheries biologists and frustrate sport anglers.

The Central Basin schools of yellow perch had yet another poor hatch in 2021, as documented by August trawl net surveys. The dramatic drop in perch numbers last year forced the state to slash the sport fishing daily bag limit from 30 perch to a meager 10 perch from Huron to Fairport Harbor.

The Western Basin perch hatch, however, was declared to be good, though many anglers disagreed. Perhaps it was helped by a years-long moratorium on commercial fishing nets in the western end of Lake Erie. The perch fishing was not great, reported sport fishermen, but in late summer 30-fish limits finally began to pop up.

The August surveys documented the disparity.

The Division of Wildlife’s yellow perch surveys completed during August in Lake Erie’s Western Basin resulted in an index of 380 perch per hectare. A hectare equals about 2.47 acres of water.

When conditions change and favor the Central Basin, the perch population pattern is anticipated to reverse, say biologists.

“Lake Erie yellow perch are surveyed and managed as regional populations within management zones. Our surveys during the past few years have shown a marked difference in the yellow perch hatch when comparing the west, central, and east zones,” said Travis Hartman, the Division of Wildlife’s Lake Erie fisheries program administrator. “The Division of Wildlife uses these boundaries to monitor perch hatches and make recommendations to the Great Lakes Fishery Commission on safe harvest levels (for sport and commercial fishermen) by comparing results to previous years.”