What a shock! Jewelry wins Best of Show 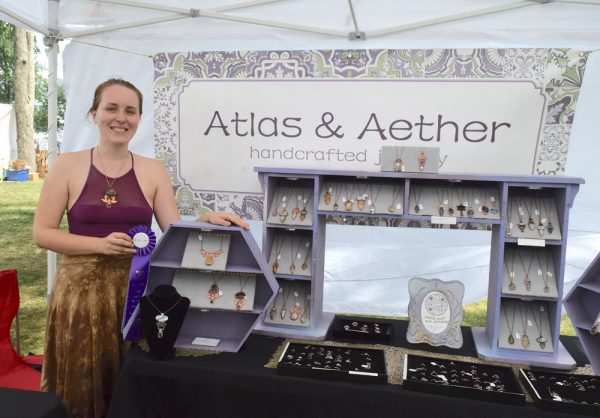 Unique copper jewelry created by Cleveland area artist Ashley Smith of Atlas & Aether was judged to be the Best of Show on Saturday at Arts in the Park. The annual show was hosted by the Port Clinton Artists’ Club at Lakeview Park. (Photo by D’Arcy Patrick Egan)

The Port Clinton Artists’ Club has enjoyed a lot of first-time exhibitors in recent years to buoy its large Arts in the Park show at Port Clinton’s spacious Lakeview Park on the Lake Erie shoreline, so it wasn’t much of a surprise when Ashley Smith and her unique jewelry making a debut here was judged Best of Show on Saturday afternoon.

“I specialize in copper jewelry, and create the pieces through electro-forming,” said Smith, a process that may be a bit of a shock to traditional jewelry artists. “I grow copper using electricity and an acid bath, a type of plating, with precious stores featured in the rings and pendants.”

The combinations are striking. Her “Entropy” pendant, for example, was a combination of blue opal, Botswana agate and Sterling silver.

“This is my second year exhibiting my jewelry after getting a degree from Kent State University in jewelry metals and enameling. I love this area because it’s on Lake Erie, much like my studio on the east side of Cleveland. I’ve enjoyed this show so much this weekend, I hope to return to Arts in the Park next year,” she said.

The list of exhibitors judged as first in their categories included:

More than 100 exhibitors and a large crowd of visitors made the scene, and sales were brisk said Patrice Kihlken of Modern Vintage, including her authentic antique maps of the Lake Erie region. Marblehead’s Kihlken volunteers with the Port Clinton Artists’ Club and the Greater Port Clinton Area Arts Council.