What a year for for our athletic stars! Port Clinton, Oak Harbor sports teams earn success for the ages 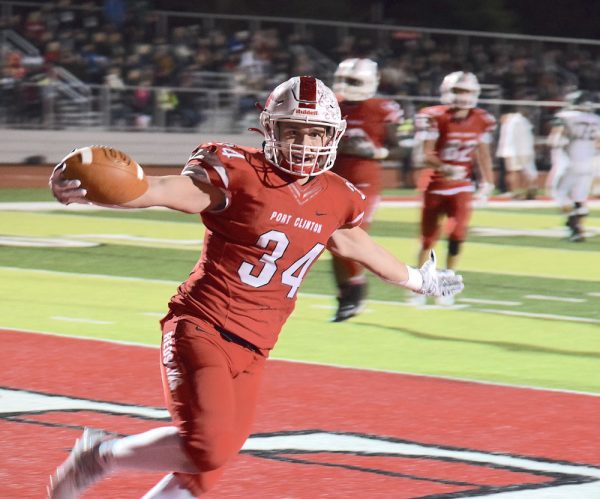 Port Clinton running back Garrett Cornell was dominant in the Redskins success on the gridiron last season. (Photo by D’Arcy Patrick Egan)

The following is a list of the top 15 sports stories of the school year.

Before 2021, Port Clinton had won two playoff games in school history. This season, the Redskins won four games in the postseason and claimed the first regional championship in program history with a 49-21 win over defending Division IV state champion Van Wert.

Port Clinton running back Garrett Cornell rushed 30 times for 206 yards and two touchdowns and defensive back Cashes Jackson finished with four pass breakups, an interception, a forced fumble and a touchdown pass off a trick play.

Quarterback Cam Gillum completed 12-of-21 passes for 174 yards and a touchdown and an interception and rushed 16 times for 57 yards and his three scores. Josh Hurst had seven catches for 119 yards and two touchdowns and Tyler Webb finished with four catches for 80 yards.

Port Clinton’s season ended with a 34-15 loss to Youngstown St. Ursuline in the state semifinals, but it couldn’t spoil the most successful season in school history. 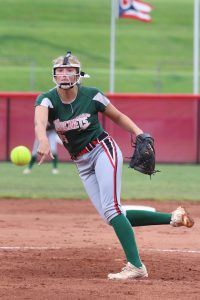 Oak Harbor had two district titles under its belt heading into the 2022 season, but a regional championship had eluded them. The Rockets came close five years ago when it lost, 2-0, to LaGrange Keystone, in the Division II regional finals, and they fell again to the Wildcats one year later, 4-1, in the regional semifinals.

After having a bad taste in its mouth due to a loss to Wauseon last year in the district finals, Oak Harbor was on a mission to win its third district championship, which it did, defeating the Indians, 10-3, in the finals.

But the most exciting game came in the regional final against Lexington, a game the Rockets won 5-4.

But Reagan Schultz induced Eyan Underwood into hitting a groundout back to herself to end the game with the tying run on second.

Periat finishes second in Division II in the 50 free

Periat nearly won the state championship in the 50 freestyle, finishing in 23.68 seconds, just 0.44 behind Shaker Heights Hathaway Brown’s Taplin Seelbach. Periat also finished 11th in the 100 butterfly in 57.64 and was part of two relay teams that finished in the top 10. (Periat finished 10th in the 50 free and the 100 fly last year.)

The 200 medley relay team of Periat, Gabbi Porter, Alexa Taylor and Carlie Blaesing finished eighth in 1:49.01, good enough to reach the podium, and the 200 free relay team of the same quartet took 10th in 1:39.86.

And Brigitte Schroeder had a great showing in the diving competition, finishing eighth with 380.65 points. (She was 12th in Div. II last year.)

After suffering a torn ACL and missing her sophomore season, Oak Harbor’s Ryann Steinbrick wasn’t even sure when she’d return to the court.

Steinbrick not only returned, but solidified her spot in Rocket history as she scored her 1,000th career point in an 18-point performance in Huron’s 68-50 win over Oak Harbor on Dec. 5.

She will go down in history with some of the other Rocket greats like Andrea Cecil, Jan Harvey and Sophia Eli. Steinbrick is the seventh Rocket to reach 1,000 points. She also scored 38 points, the second-highest scoring output for a game for anyone in program history behind Cecil, and made 20 free throws in a 59-48 win over Fostoria and scored 35 points in a 54-53 win over rival Port Clinton.

Steinbrick earned honorable-mention distinction in Division II for her efforts.

After losing his first match in the Division III state tournament, Cade Petersen could have panicked.

Instead, the Oak Harbor senior rebounded and won three consecutive matches and four out of the next five to earn a fifth-place finish at 144 pounds.

Petersen lost to Barnesville’s Ayden King by fall in 3:22 in the first round. He then defeated South Range’s Jacob Richardson, 5-2, Mohawk’s Jace Margraf, 3-1, and Monroeville’s Hunter Vogus, 3-1. Petersen then lost, 7-2, via sudden victory to Wayne Trace’s Jarrett Hornish before recovering to beat the No. 1 seed, Smithville’s Michael Harris, 3-1, to place fifth, handing him just his third loss of the season.

As a team, the Rockets finished 50th with 10 points.

Junior Owen Miller (138) won his first match in close fashion, defeating Pleasant’s Anwar Ali, 5-3, in the first round before losing to Legacy Christian’s Camron Lacure, the eventual-state champion, 14-7, in the quarterfinals. Miller then lost by fall in 4:22 to Tuslaw’s Zach Lyons, coming up just one match short of reaching the podium.

With one individual reaching the podium and two relay teams placing, the Oak Harbor boys track and field team finished 16th in Division II with 14 points.

Hannah Schulte finished her career as one of the most decorated players in Oak Harbor soccer history.

The senior finished with 103 career goals, just four short of the record held by Erica Lipstraw. Had Schulte not missed the latter part of her junior season with a knee injury, she might’ve broken the record.

For her efforts, Schulte earned second-team honors in Division II and was also named the Sandusky Bay Conference Bay Division’s Player of the Year.

Her 100th goal came as part of a hat trick in the Rockets’ 12-0 win over Tiffin Columbian in a sectional final. Schulte also helped Oak Harbor win its fourth district championship just a week later by scoring a goal in the Rockets’ 2-1 win over Wauseon.

Grayson Clark had already secured his place as being one of, if not the greatest golfers in Danbury history. His performance at the Division III state tournament only added to his list of accolades.

The senior is the only golfer in school history to qualify for the state tournament, and recently finished tied for 19th out of 72 golfers. He shot a +21 on 36 holes, a 75 followed by an 88 for a total of 163 strokes at The Ohio State University Scarlet Course.

Earlier in the season, Clark was the medalist at the Ottawa County Meet and the Clyde Invitational and was a four-time MVP on the team.

Behind two individual placers and a relay team that reached the podium, Oak Harbor finished 12th in Division II with 70.5 points.

It followed up the most successful season in program history, one that saw the Rockets finish fifth in Div. II and win its first district championship.

Now in her seventh season leading the program, she notched her 100th win after the Rockets defeated Woodmore, 3-1, on Sept. 2.

Gezo, a 1983 Oak Harbor graduate, has coached within the program for 16 years — ranging from the JV coach to the freshman coach and coaching both grades in the junior high — before taking the varsity job. She credits her players from the Class of 2018, which consisted of Peyton Bloomer, one of the most storied players in team history who is competing on the volleyball team at Cleveland State University, Logan Harris, Kaytlynn Sandwisch, Alayna Hetrick and Jill Thorbahn, who she led as the eighth-grade coach in ’14, with talking her into taking over for Megan Maguire.

As a freshman, Oak Harbor’s Reagan Schultz got to learn from the likes of Peyton Bloomer, Logan Harris and Kaytlynn Sandwisch as the Rockets won just their second district title in program history.

Schultz is the only player in school history to register 1,000 digs. She also holds the record for digs in a season (394) and assists in a game (58).

Schultz’s best sport is actually softball. She was named to the first team in Division II and led the Rockets to their first regional championship. Schultz will continue her softball career at Kent State University.

In a hard-fought match where the littlest of things could make the difference, Remi Gregory recovered a loose ball in front of the net to score with 17 seconds remaining to lead Oak Harbor to a 2-1 win over Wauseon in a Division II district championship.

With seconds remaining, the Rockets got a shot on goal that was saved by Indians goalkeeper Madison Strain. Hannah Schulte, who was about five feet from the goal, couldn’t quite control the ball off the save, but Gregory got the rebound and scored, sending Oak Harbor into a frenzy.

It was the fourth district title for the Rockets.

Despite leading by two runs on two separate occasions and being one out from victory, Port Clinton was unable to win its Division II district semifinal matchup with Wauseon.

The Indians got the win as Olivia Gigax hit a two-run home run in the bottom of the eighth inning of Wauseon’s 6-4 win over the Redskins.

Wauseon had to rally just to tie the game on two separate occasions to send it into extra innings, coming back from deficits of 2-0 and 4-2, respectively.

Port Clinton, the No. 9 team in the district, won a sectional title by beating Perkins in the semifinals and rallying to defeat Clyde, which was seeded third, 5-4.

In the win over the Fliers, Alliyah Wharton came up big, driving in two runs in the top of the seventh inning.

With one out in the top of the seventh, Kenzie Martinez was hit by a pitch and Kennedy Adkins laid down a bunt that ended with her being safe at first base and Martinez advancing to third. Adkins stole second and, facing an 0-2 count, lined a single through the left side of the infield to score two runs and account for the final runs of the game.

Port Clinton’s run would end in the state semifinals to Youngstown Ursuline as the ‘Skins lost, 34-15.

The 41-year-old coach, who had led the Redskins for the last nine seasons, accumulated a 57-41 record, good for a winning percentage of .582, the best in program history, even better than legendary coach Joe Lukac.

Heller, who was an assistant at New Riegel before coaching the Lakers for the past five seasons, was a head coach for a total of 27 years. He was the head coach at Oak Harbor for 10 years and worked there as an assistant for two years before that. Heller also coached at Lakota for 24 years, 12 of them as the head coach. He notched 337 victories, including 47 with Danbury.

Heller’s teams won five league titles, two with the Rockets in the Sandusky Bay Conference, and three with the Raiders in the old Suburban Lakes League. He also oversaw Oak Harbor winning 46 consecutive regular-season games from 2002-04.