Wilber wraps up career as law director after 40 years 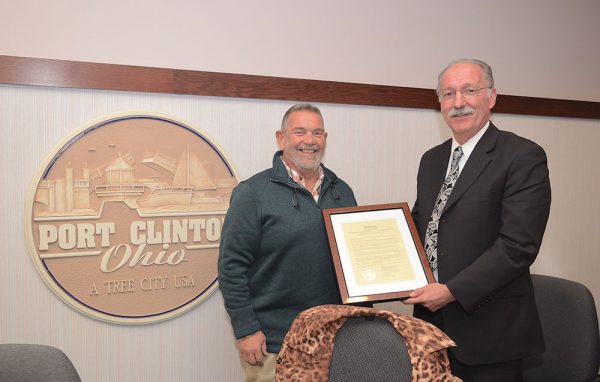 Port Clinton Law Director George Wilber will wrap up his career at the end of the year, handing the reins for the part-time position to newly-elected Dina Shenker.

It is a pretty good bet that Shenker, who is also a full-time assistant prosecutor in the Ottawa County Prosecutor’s Office, won’t hang around as long as Wilber. In a proclamation by Mayor Mike Snider, it was pointed out that Wilber had set the longevity mark for Ohio solicitors long ago.

Wilber has been a fixture since Jan. 1, 1980, covering 10 four-year terms and working under seven mayors over his 40 years as law director. In fact, if Mayor Snider is correct, Wilber has put in more than twice as many years as the next law director on the Ohio list, who served for a mere 18 years.

Wilber also served as law director for the villages of Put-in-Bay and Marblehead.

Wilber was honored with proclamations from Mayor Snider and Sen. Theresa Gavarone.

Wilber followed in family footsteps in earning a law degree and becoming a solicitor for Port Clinton. His English-born father, Adair Wilber, was an attorney who practiced in Port Clinton. His mother, Ethel, worked in the family law office.

“Who would have thought when I started in 1980 that I would be sitting here today,” Wilber told Port Clinton City Council and a packed council chambers. “It has been an interesting journey.”

Wilber and his fiancé Kathy Jo Schweitzer, a retired Port Clinton High School teacher, will continue to live in Port Clinton. He will focus on his private practice now that he has retired from handling Port Clinton’s legal work.