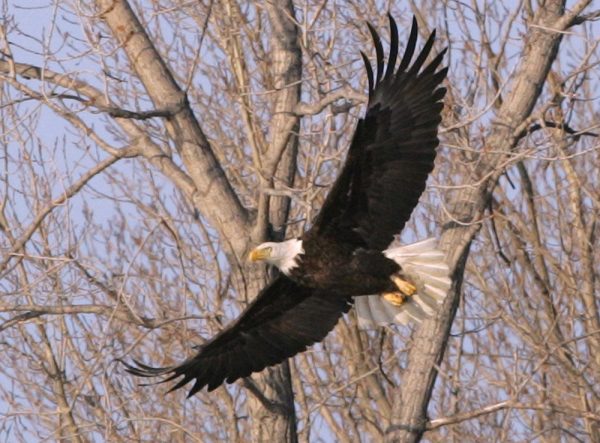 For the first time in eight years, the Ohio Division of Wildlife is attempting to find every bald eagle nest in the Buckeye State. In Ottawa County, a hotbed for bald eagles and their many nests, the wildlife experts are asking citizen scientists to report their sightings of the national bird.

“The bald eagle’s remarkable comeback speaks volumes about Ohio’s conservation efforts,” said Gov. Mike DeWine. “With its population on the rise, the bald eagle will continue to serve as a powerful symbol for our state and our country for years to come.”

Watch for updates of verified nests throughout the coming months at wildohio.gov .

“From the Ohio River to Lake Erie, our state has become an ideal home for the bald eagle,” said Ohio Department of Natural Resources Director Mary Mertz. “This is a great opportunity to get outdoors and see this soaring raptor, all while providing a valuable conservation service to our state.” 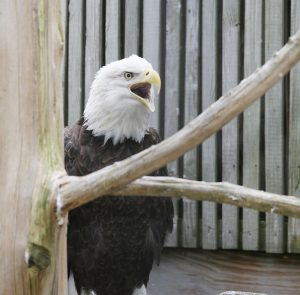 This bald eagle was struck by an airplane landing at the Erie-Ottawa International Airport in Port Clinton and was grounded by a broken wing. Mona Ruger and her dedicated rehabilitation crew at Back to the Wild rehabilitation center in Castalia, Ohio soon had the glorious bird back in the air. (Photo by D’Arcy Egan)

The bald eagle was once an endangered species, with only four nesting pairs in Ohio in 1979. However, thanks to partnerships between the Division of Wildlife, Ohio zoos, wildlife rehabilitation facilities, and concerned landowners, its population increased. The bald eagle was removed from the federal list of threatened and endangered species in 2007 and from Ohio’s list in 2012.

“Wildlife biologists estimate Ohio hosted more than 350 nesting pairs of bald eagles in 2019,” said Division of Wildlife Chief Kendra Wecker. “Many of those nests are situated along Ohio’s portion of Lake Erie, and along with Ohio’s rivers and reservoirs.”

Ohio Division of Wildlife biologists typically estimate the number of eagle nests by flying select areas of the state and verifying sightings. However, identifying the locations of all the nests in the state hasn’t been attempted since bald eagles were delisted in 2012. Wildlife staff, including wildlife officers, will verify nest locations. This will help update the Division of Wildlife’s historical databases and confirm the results of estimated counts.

Bald eagles in Ohio typically lay eggs and incubate in February and March. Young eagles leave the nest about three months later, usually in June. The birds nest in large trees such as sycamores, oaks, and cottonwoods near large bodies of water. Fish and carrion are preferred foods.

Remember that bald eagles are protected under both state law and the federal Bald and Golden Eagle Protection Act. It is illegal to disturb bald eagles. When viewing these majestic birds, remember to respect the bird’s space and stay at least 100 yards away from the bird or nest. Disturbing bald eagles at the nest site could lead the pair to abandon the eggs.

As with many of Ohio’s native wildlife species, bald eagles require specific habitat conditions to thrive. Bald eagle habitat protection and research is funded by the sale of bald eagle conservation license plates, income tax check-off donations to the Endangered Species and Wildlife Diversity Fund and sales of the Ohio Wildlife Legacy Stamp. Learn how to support Ohio’s magnificent wildlife like the bald eagle at wildohio.gov/support.