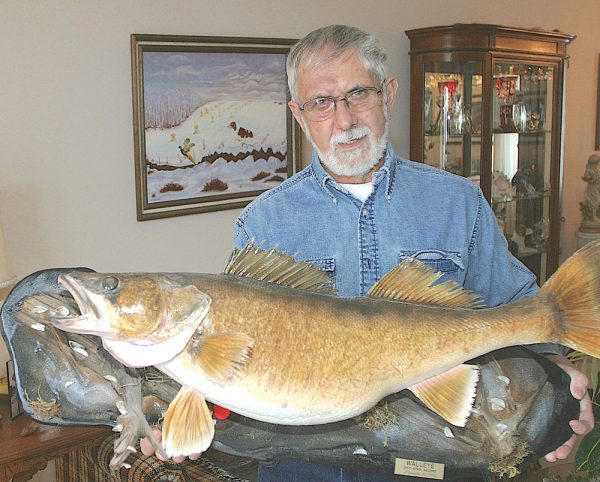 Tom “Blackie” Haberman of Brunswick, Ohio caught this 16.19-pound, 33-inch walleye while fishing for yellow perch off Cleveland on Nov. 23, 1999. Despite the millions of walleye caught since, it remains the Ohio record. With record numbers of walleye in Lake Erie, will this be the year someone sets a new walleye mark?

It’s a bit of magic, as Lake Erie’s plentiful walleye migrate to Western Lake Erie and the Maumee and Sandusky Rivers each spring. The schools of walleye are seeking shallow depths in order to spawn, a process driven by longer days and warming waters.

There are an estimated 150 million to 160 million walleye swimming in Lake Erie these days that are at least 15 inches in length, meaning they’re legal for the legion of Lake Erie fishermen to catch and keep. Judging by the crowds of trucks and boat trailers filling such popular launch areas as Catawba Island State Park and the Mazurik Boat Access on Marblehead, the annual migration of anglers to these famed walleye-rich waters has begun, as well.

Many will be chasing a limit of six walleye each day, the year-round target. Some will be going after the biggest fish, earning a Fish Ohio Award for a 28-inch walleye.

But a state record walleye?

Andy Emrisko of Litchfield, Ohio, remembers the record catch like it was just yesterday. One of Haberman’s best friends and the skipper of Wave Walker Sportfishing Charters, Emrisko took Haberman fishing that day — for yellow perch.

“We were going to go rabbit hunting that morning, but the weather was too warm for the beagles. The perch were biting, so we jumped on my boat at East 55th Street Marina in Cleveland.”

The men were dunking typical perch rigs baited with emerald shiner minnows. Late in the afternoon. Haberman, who still lives in Brunswick, Ohio, set the hook on a big fish. Emrisko suspected it was a lunker sheepshead, or freshwater drum.

When the fish finally was fought to the surface, both anglers were stunned. Emrisko netted the state record fish, then began contacting media friends, including this outdoors editor for The Plain Dealer newspaper.

I was out of town, but told Emrisko by telephone to shoot all of the film on the disposable cameras he always kept on the boat. Then ordered him to deliver it to the newspaper’s downtown offices. From there, the men stopped at local television stations, before calling the Ohio Division of Wildlife for suggestions on weighing the big fish.

“I would have thought someone would break that record over the past couple of decades, especially with derbies so popular in the fall now,” said Emrisko, who is guiding on Lake Erie again out of East 55th Street Marina. “I’ve got some ideas on how to possibly catch the record walleye, but I’ve never been willing to devote the long hours to testing those theories.”

It’s expected by most experts that the record-breaking walleye will be a female laden with eggs, and that it will be caught during the spawning season. Those big fish are most often found in late March and April on the Western Lake Erie reefs, and in Maumee and Sandusky rivers.

The walleye begin spawning as Lake Erie and the rivers warm up to the 40-degree mark, which is happening right now. The water is still dangerously cold, should an angler take a dunk, but female walleye will start broadcasting their eggs — up to 400,000 of them by a 10-pounder — for the males to hover over and fertilize.

There are so many walleye in Lake Erie that Ohio fisheries biologists don’t worry about needing a closed season to protect walleye during the spawning season, as many other states require, said Eric Weimer, Supervisor of the Sandusky Fisheries Research Unit of the Ohio Division of Wildlife.

“The walleye spawning success in recent years has been tremendous,” said Weimer. “There are a lot of walleye out there, and that includes a lot of trophy walleye. It’s a bit of a puzzle why that record has lasted so long.”