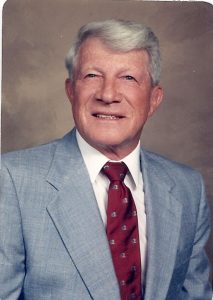 William “Bill” L. Briggs, 101, of Oak Harbor, passed away Tuesday, Sept. 27, at Elmwood Assisted Living in Fremont. He was born on June 10, 1921, in Detroit to Lorin and Mable (Finney) Briggs. On May 9, 1945, in Detroit, he married Margaret M. Knight, and she preceded him in death on May 23, 1990. Bill served in the U.S. Navy during World War II in the South Pacific aboard the USS Cleveland CL55. He was the owner/operator of Formetal, Inc. in Oak Harbor for over 40 years. Bill was a member of the Oak Harbor United Methodist Church, Oak Harbor Rotary Club, Life Member of the Oak Harbor American Legion Post #114, and Life Member of the Oak Harbor V.F.W. Post #8732. Years ago, Bill played on the Oak Harbor Merchants baseball team and the American Legion softball team, and through the Rotary Club he helped start organized Little League Baseball in Oak Harbor. Bill also volunteered with the Charity for Children with Disabilities. He enjoyed golfing, flying his Cessna Skylane plane, and skiing in his younger years. He was an avid Detroit Tigers fan as well.

Bill is survived by his sons, Robert W. (Billie Dee) Briggs of Aurora, and Patrick A. Briggs of Oak Harbor, 7 grandchildren, and 10 great grandchildren. He was preceded in death by his parents, wife, brother, Lorin Briggs, and longtime companions, Marge Fought and later Doris Ford.

A Celebration of Life for Bill will be conducted 11 a.m., Thursday, Oct. 6, at the Oak Harbor United Methodist Church, 360 E. Ottawa St., Oak Harbor, with visitation prior from 9-11 a.m. at the church. Interment will follow in Salem Township Union Cemetery, Oak Harbor, with military graveside services conducted. Memorial contributions in memory of Bill may be given to the Oak Harbor United Methodist Church or the Oak Harbor Rotary Club Scholarship Fund. Robinson-Walker Funeral Home & Crematory, 165 E. Water St., Oak Harbor is assisting the family with arrangements. Online condolences may be shared with the family at www.walkerfuneralhomes.com.