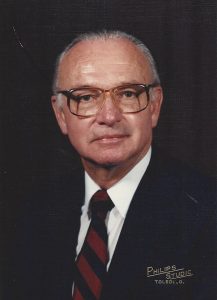 It is with great sadness that we announce our beloved Dad, William Silas Richards, passed away on April 10 at the age of 98. Bill was predeceased by his wife, Jeanne Marie in July 2016, his sister Jennie in 2015 and his stepson, Robb, in 2006. He lived a life full of laughter, adventure and love for his family.

He was born in Toledo, Ohio to William and Mary Richards. Dad and Jeanne moved to Delrey Beach, Fla. to enjoy their retirement. He was an avid golfer and loved boating in his earlier years.

He served in the United States Army Air Corp where he was frequently quoted as saying I was born in Toledo, Ohio but grew up in the Air Corp. We are happy Dad was honored for serving his country two weeks before he passed. After the war, Dad oversaw the Catawba Island Club and was active in the Ohio Citizens Bank and Central Securities where he was involved in real estate development in the Toledo, Ohio and Port Clinton.

Shortly after Jeanne Marie passed in July 2016, Dad moved to California to be closer to his two daughters, Randi McFarland (Emerson) of Walnut Creek and Sondra Richards Brown (Jim) of Brookings, Ore. Also close to his heart was his stepson Mark Riehle (Patricia) of LaSalle, Mich. Dad had six grandchildren, John and Chris Riehle, Nicholas and Conor Riehle and Kacie and Will McFarland. In addition, he was proud to have two great grandsons, Maximus William Mell and Luka Riehle.

At his request, there will be no funeral services. His ashes will be scattered in Florida in the Atlantic Ocean.