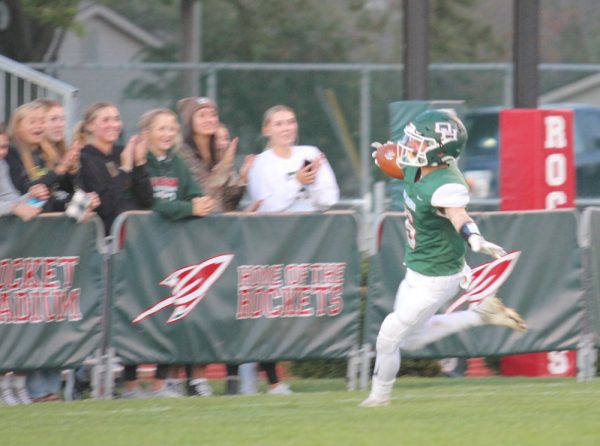 After intercepting an early pass, Cade Petersen raced 20 yards to push the score to 21-7 for Oak Harbor. (Photos by Julie Overmyer)

OAK HARBOR — In the last five years or so, Oak Harbor has grown accustomed to throwing the ball around and giving their quarterbacks plenty of leeway.

But on Friday, the Rockets got back to their roots and played smash-mouth football, rushing for 435 yards behind great performances from Dalton Witter and Carson Ridener in their 56-7 victory over Vermilion.

Witter carried the ball 12 times for 185 yards and three touchdowns and Ridener had eight rushes for 113 yards and two scores to help pace Oak Harbor, which has won three games in a row.

“They’re great running backs. They allow us to have depth,” said Oak Harbor coach Mike May. “They’re both hard, physical runners. We rotate them in each possession and that allows them to stay fresh because they both start on defense.”

The offensive line has been playing well for much of the season. It’s a unit that consists of Parker and Garrett Lindsay, the two guards, tackles Ryan Snow and Zach Clune and Dylan Schiets at center. 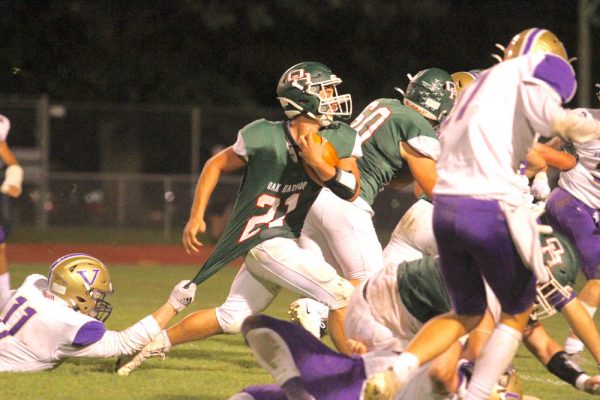 Dalton Witter ran for 185 yards on 12 carries to derail Vermilion’s hopes on Friday night in a 56-7 win.

“I thought the offensive line did a great job opening up holes,” said May. “We want to establish the run early, and we were able to do that.”

The game actually began with a Vermilion score, which came on a 10-yard touchdown pass from Ben Rini to Bryce Hoerig. The score was set up on the first play from scrimmage when Rini found Hoerig for a 57-yard reception. M.J. McCann’s extra point made it 7-0.

The Rockets responded to take control of the game by scoring 56 unanswered points. The first drive covered 65 yards in eight plays and ended in a touchdown when Witter scored on a 16-yard scamper. Cade Petersen, who kicked eight extra points, nailed the PAT to tie the score. On the drive, Witter carried the ball seven times for 57 yards.

After forcing a punt, Oak Harbor drove 79 yards and scored on second-and-9 from the Vermilion 33 when quarterback Jaqui Hayward faked the handoff to Ridener and raced up the middle for the touchdown.

On the Sailors’ ensuing possession, Rini threw a pass that was tipped and intercepted by Petersen, who raced 20 yards for the touchdown to make it 21-7.

In the second quarter, Ridener scored on a 14-yard touchdown run and Witter had a 67-yard score that put the game away just before halftime.

With a dual-threat quarterback in Hayward, the Rockets (4-2, 1-0 Sandusky Bay Conference Bay Division) can also use the read option to keep defenses off balance, and that was the case in this game. Hayward didn’t run the ball much, but when he did, it caught the Sailors (1-4, 0-1) off-guard. He carried it six times for 63 yards and a touchdown.