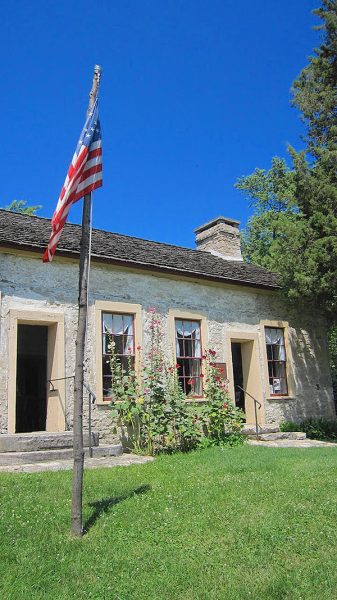 The stone Wolcott Keeper’s House at 9999 East Bayshore Rd., Marblehead is almost two centuries old. It once housed the keeper of the Marblehead Lighthouse and his family.

The 29th season of open houses at the Wolcott Keeper’s House will begin Tuesday, June 18 with a summer schedule that runs through Aug. 31 and features its annual Civil War Encampment on Oct. 12.

The Keeper’s House will be open on Tuesday, Wednesday, and Thursday from 1-5 p.m. and Saturdays from 11 a.m.-4 p.m. Docents share the history of Revolutionary War veteran Benajah Wolcott, the first keeper of the Marblehead Lighthouse. The history of site includes the first Ohio land skirmish of the War of 1812.

The 1820’s stone structure at 9999 East Bayshore Rd. in Marblehead was built by William Kelly, the same builder as the lighthouse.  The Ottawa County Historical Society purchased the deteriorating structure in 1989, and has restored and strengthened it as a venue for preserving and sharing the history of the peninsula.

The stone home replaced a log cabin Wolcott and his family had lived in after they moved to the region from Connecticut. Wolcott had been hired to survey the area by George Washington in the late 18th Century.

Wolcott’s first wife, Elizabeth, died during the War of 1812. He married Rachel Miller,  a schoolteacher from Sandusky, who became the Light’s second keeper after his death.

For more information, publications, and other events,  visit the OCHS website at www.ottawacountyhistory.org