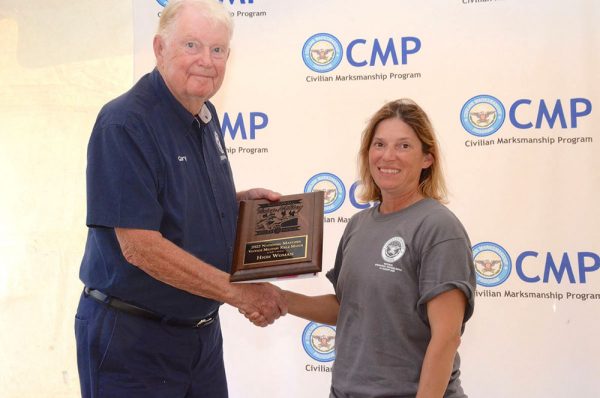 The 2022 National Games Matches, part of the annual Civilian Marksmanship Program (CMP) National Rifle Matches at Camp Perry, belonged to the women as they collected national record scores in four of seven main events offered within the schedule.

Kerri Lewis, 46, of Middletown, Rhode Island, shattered the previous High Woman record in the Vintage Military Match with 271-4X – clearing the score by a whopping 13 points.

Not to be outdone, Meghann Beaver, 23, of Indianapolis, Ind., etched her own national record in the High Woman category of the Springfield Match as she bested the prior record score (held by Lewis) by five points – reaching 287-9X in the event.

Likewise, Maisey Loucks, 27, of Mechanicville, N.Y., earned High Woman in the Carbine match along with a new national record score – surpassing the old record by three points – while Madelynn Schnelle, 15, of Crawfordsville, Ind., set a score of 283-5X (one point over the previous record) in the John C. Garand Match to claim the High Woman honor.

The National Games Matches are the CMP’s own lineup of recreational-style vintage and modern rifle competitions. The events provide unique challenges to competitors while also celebrating the legacy of each remarkable firearm on the historic grounds of Camp Perry – home to the National Matches for over a century.

Among many fun and challenging events, the Games series includes four main rifle groupings (Garand, Springfield, Vintage and Modern Military), as well as aggregate awards for those who fire multiple rifle types. Recognitions are also awarded to the High Junior, High Senior, High Garand Senior and High Woman of each match.

Brian Williams, 48, of Granby, Mass., is no stranger to the National Games events. He’s the current national record holder in the Vintage Military Match and is a past winner of the Three-Gun Aggregate while also claiming the Four-Gun Aggregate four out of the last five years.

“I have a few goals for these matches every year, and this year I was able to stay consistent enough to achieve all three,” Williams said.

His conquests for 2022 were the M1 Carbine Match and return wins in both the Three-Gun and Four-Aggregates – all in which he went on to earn.

Williams led the Carbine Match by more than 10 points, achieving a score of 375-10X. Merton Emery, 66, of Auburn Hills, Michigan, landed in second with 364-7X and claimed the High Senior title. Other notable performers during the Carbine event included Cole Aussieker, 16, of Wenona, Illinois, who was High Junior, and Dean Wilkening, 71, of Decatur, Indiana, who marked High Grand Senior status.