“These volunteers have been dedicated to remembering military veterans and funding the Wreaths Across America program. Everyone should be very proud of their efforts,” said Diane Belden, who helped bring the worthwhile program to Ottawa County six years ago.

Wreathes Across America was designed to help remember the lives of military veterans by placing a small American flag and a wreath on their graves, as well as hosting a program that would drive home the great sacrifices made by the individual veterans.

“I was ill with the flu last year, but wanted to make sure to be at this year’s Wreaths Across America,” said Tanya Frost of Catawba Island. “It was a tremendously moving experience for me. I’m so glad I attended and could place wreaths on many of the graves.”

The special ceremony was held at Union Cemetery in Oak Harbor, Sackett Cemetery in Danbury Township, Riverview Cemetery in Port Clinton and Catawba Island Cemetery on Catawba Island. They were among 1,400 cemeteries around the country where more than 1 million wreaths were placed.

Representatives from the Army, Navy, Air Force, Marines and Coast Guard were there to celebrate the military veterans. At Catawba Cemetery, Lt. Col. Christopher Bellie, Air Force commander of the 112th Fighter Squadron in Toledo, talked of their bravery and how humbled he was to be among them, and hear the many stories of their bravery. 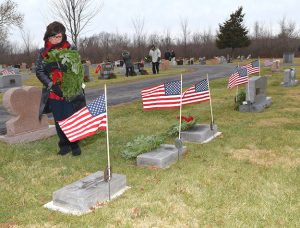 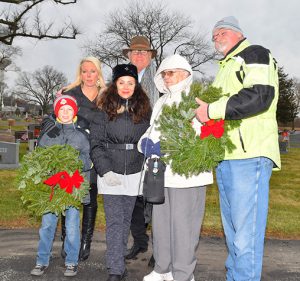 Gold Star families who have had a member of the family die in battle were also honored around Ottawa County during Saturday’s Wreaths Across America ceremonies. The term Gold Star dates back to World War I, when families flew flags with stars representing each loved one fighting in the conflict. Among the Gold Star families with military members who have died were Heather Martin and her son, Brody Bollinger, at left, taking a wreath to Heathers brother in Bellevue, and Dr. John Davenport, Dr. Diana Kyrkos Davenport, Jane Davenport and Jordan Davenport of Catawba.