The Walleye Drop crews brought their rain gear and were surprisingly ready to handle drizzles, downpours and thousands of revelers. At the stroke of midnight on Monday they lowered Wylie, a 600-pound fish, despite gusting winds along the Portage River in downtown Port Clinton.

Then the fireworks went off, signaling a job well done.

The Minnow Drop earlier in the afternoon was held indoors at the Knights of Columbus Hall a block away. Gaggles of youngsters were ready to party on punch, cookies and the many games and attractions.

Sillie Tillie and her party balloons and games were popular, as well a kid’s bingo game run by a young crew and a coloring contest. Kids were eager to pet adorable pygmy goats from The Watering Hole Safari and Waterpark (Monsoon Lagoon). Spin-A-Prize and other games offered rewards, and little balloons kids could launch at one another were popular.

The Minnow Drop had its own fireworks, sort of. When the balloons and a stuffed fish billowed from a huge ceiling net at the stroke of 6 p.m., the crowd of kids were quick to break them in a bevy of mini-explosions.

The steady late afternoon and early evening rain showers resulted in a noticeable lack of revelers rolling up and down Madison Street. Few minded, camping out in various bars and restaurants.

Many were waiting for the 7 p.m. launch of the inaugural “Bar Swim,” a brand new way to help partiers efficiently visit a variety of pubs and taverns in the region.

The “Bar Swim” employed a trio of Cleveland-based Barons Buses to ferry partygoers to six bars in comfort. The high-tech buses were warm, dry and had Wi-Fi, and efficiently made their rounds until it was Walleye Drop time.

The new Wylie Walleye Jr. was ready in front the of stage at the north end of Madison Street, his LED lights twinkling in the evening light.

This version of Wylie created a couple of years ago by Rain Drop Products in Ashland has hundreds of LED lights that keep changing colors, and it is waterproof. The 20-foot fish had to curtail its high-flying ways, though, because of gusting west winds.

“We had to be careful because of the brisk winds, so we couldn’t lift Wylie as high as we would on a calm evening,” said Walleye Drop Chairman Don Clemons of The Bait House Bar on the River in Port Clinton.

An enormous crowd didn’t mind, cheering Wylie Walleye Jr. all the way to his cradle in front of the Walleye Drop stage. 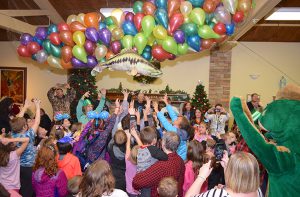