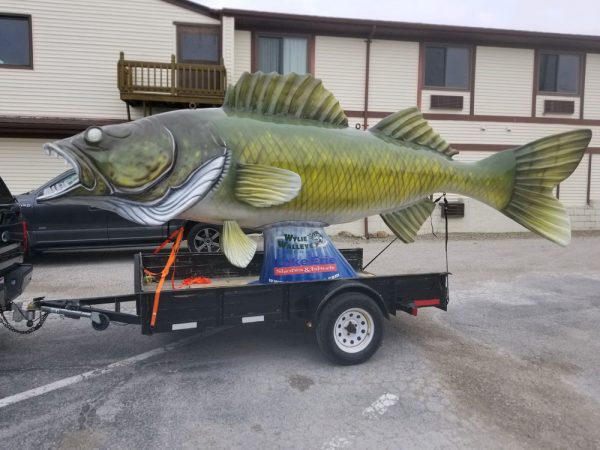 Wylie Walleye Sr. was a little bruised after recent high winds toppled his trailer in Port Clinton, but he’ll be ready for his Walleye Drop on New Year’s Eve!

As a result, Wylie was placed on a trailer borrowed from the City of Port Clinton. The straps were weathered and, during recent high winds in Downtown Port Clinton, the straps broke.

Buffeted by the big winds, Wylie ended up taking a spill from his trailer. The big guy sustaining minor bruises and scrapes during the high winds, but is recovering nicely.

Wylie was rescued by his many friends, bolted to a small utility trailer and taken indoors until he can safely be displayed on his “fur-ever” home. The Wylie Walleye Foundation will soon announce a fundraising goal to acquire a permanent trailer that the Wylie Walleye Foundation can use to securely transport Wylie and provide our favorite fish with a cement mount to be located in downtown Port Clinton.

The outside location has yet to be determined, but the foundation is working to provide Wylie a permanent place to be proudly displayed as the mascot of Lake Erie. Donations can be made at www.wyliewalleyefoundtion.com.

Later this month, be sure to celebrate New Year’s Eve and watch Wylie Walleye make his inaugural virtual Walleye Drop, which you can safely enjoy at home with family and close friends. There will be lots of live music provided as we count down to the New Year with Wylie!

Happy Holidays from the Wylie Walleye Foundation Committee! The details will be available at walleyedrop.com, and by following us on Facebook.