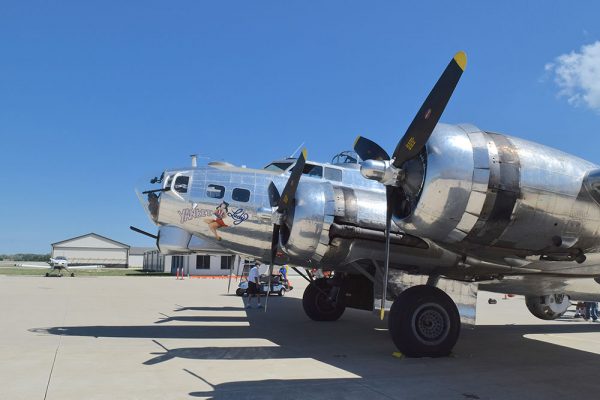 The flagship of the Yankee Air Museum in Michigan, the “Yankee Lady” B-17 Flying Fortress attracted a crowd at Liberty Aviation Museum in Port Clinton on Saturday. The legendary airplane roared from the airstrip all day long to take adventurers on a tour of the area. 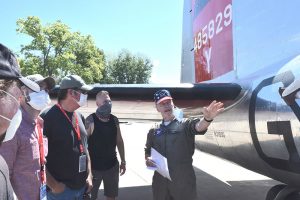 Glistening in the morning light on Saturday, the sleek, silvery “Yankee Lady” B-17 Flying Fortress had quite an audience at Liberty Aviation Museum in Port Clinton as the well-armed warship waited for a group of adventurous passengers.

The legendary 1944-built airplane, one of only 10 left from among the 12,731 that helped win World War II, had arrived from its home base, the historic Willow Run Airport in Ypsilanti, Mich. The four-engine “Yankee Lady,” with its red tail and a plethora of armament consisting of five .30 caliber (7.62 mm) machine guns, was open for tours and 30-minute Air Adventure Flights.

“The four engines burn about 200 gallons of AvGas an hour, which is pretty expensive at between $5 and $6 per gallon,” said Kevin Walsh, the CEO of the Yankee Air Museum. His son, Justin, 10, was his aide on Saturday.

“We had to build the “Yankee Lady” pretty much from scratch,” said Walsh. “When we got it, the guns and a lot of the parts were gone. She’s in perfect shape now, and it took an army of 250 volunteers to do it.

“We tour mostly the East Coast with her, a lot of southern states such as Tennessee, Louisiana, Alabama and Texas.”

As the number of World War II veterans continues to shrink, said Walsh, their sons and daughters are often the ones who want to sample what experiences their fathers and grandfathers had during World War II.