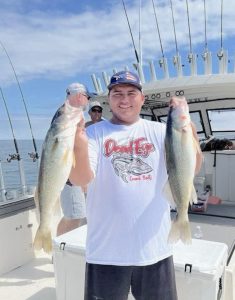 Trolling Dead-Eye diving plugs and medium-sized spoons have been catching some nice walleye around the Huron Dump and to the east.

The Lake Erie yellow perch fishing had been picking up late in the week, with the Firing Range off the Port Clinton and Camp Perry areas leading the way. Fishermen are still having to sort through a lot of small fish, but that is a plus as the small perch will grow over the winter and be available for next year’s fishing.

The G Can at the firing range is still producing perch, and A Can perch catches are starting to fire up a bit. Anglers are still having to move to find the schools of perch around the various cans, or markers, but persistent fishermen are finding fair numbers.

It is still a very light bite and you have to work for them.

Walleye fishing seemed to be doing better over the second half of the week for trolling fishermen who were heading down to the Huron Dump. Tru-Trip Diving Planers and spoons worked about 80 to 100 feet behind the boat have produced some very nice walleye.

Diving lures such as the new Dead-Eye crank baits are starting to work while swimming 80 to 100 back with 2-ounce weight. It has been best to run the Dead-Eye plugs just like a Bandit lure.

Casters are still working the reefs and rocks and producing fish depending on the winds. The calm days have been brutal for drifting and casting for walleye. We’ve been getting a few reports that fishermen are starting to catch fish along the Ohio-Canadian line.