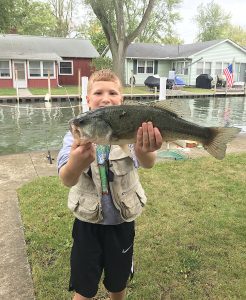 Mitch Geduldig of Brecksville, Ohio, shows off a trophy largemouth bass he caught from behind his family’s summer cottage on a Lake Erie channel in Port Clinton. (Photo by Brad Geduldig)

I’ll be providing Lake Erie anglers with a short fishing report this week. While I’d planning on wrapping up this year’s lake Erie fishing report, anyway, I knew that fall yellow perch anglers would like to know the perch bite has finally picked up, with limits of perch being taken often.

The perch bite has been very good off of Catawba Island, and all the way to Green Island. Just off Port Clinton has been a good spot, as well. The deeper waters off Gull Reef, with 38 feet being a hot spot, is attracting a crowd of boats. I know, because I took a group of six anglers out there on Sunday and we caught 150 perch.

The grade of perch has been somewhat mixed, but we are still hopefull that the bite will continue for at least for another month. I know it is nice to see the tumblers scaling the perch again out at Bay’s Edge Fish Cleaning.

Walleye fishing has consistently remained the same. Casters are getting some nice walleye off of the rock piles, although the drift-and-cast fishing for walleye has been a little spotty. Those trolling have been getting limits around the Cedar Point dumping grounds and about three miles east of Kelleys Island and the Cedar Point dumping grounds. Trolling with Tru-Trip diving planers, as well as Dispy Diver and Jet Diver rigs, are still the best with Stinger Spoons to put a limit of walleye in the cooler.

I know this week’s report is a bit short, but I wanted to give you the basic information. Look for our farewell fishing report for the 2019 season next week in The Beacon.