Yellow perch bring out the crowds of family fishermen 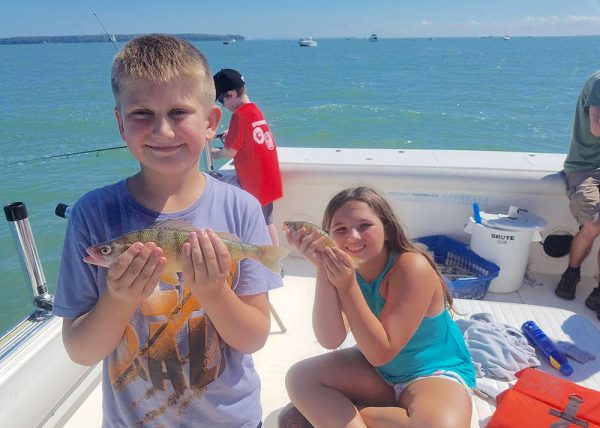 Kids and yellow perch go together like hot dogs and ketchup. The Lake Erie panfish are fun for kids to catch, and great for a Friday night family fish fry.

Trust me when I say that the yellow perch are really biting, and that’s great news for families who enjoy fishing. Kids and perch simply go together like hot dogs and ketchup, and lots of Western Lake Erie perch are filling local coolers lately.

Some of the best spots for perch have been south of Green Island, about a mile west of Rattlesnake Island, south of Rattlesnake Marina, and the buoy between Middle Bass and South Bass islands. For the most part golden shiners have been the bait of the week, although once in a while the preferable emerald shiner minnows are available.

Hopefully, the perch stay around, as they did three years ago. At that time, the jumbo perch were schooled up, but moving around a lot. There are large numbers of perch to be caught around Western Lake Erie, though sometimes the fishing has been spotty due to the weather.

Walleye fishing has been inconsistent for casters, although some mornings there has been success off the near-shore and island area rock piles. Gull Reef and Kelleys Shoal have been good spots for casting mayfly rigs and weight-forward spinners tipped with nightcrawlers.

On many mornings, the waters 8 to 10 miles east of Kelleys Island has been good. The weather buoy on the Canadian border was been a beacon for big walleye.

Trollers have been getting consistent catches but, unfortunately, they had been having to travel as far as Lorain towards the end of the week. The best method we have found lately has been to use a 2-ounce weight in front of Bandit diving plugs, with lures set to run around 90 to a 100 feet behind the boat. The best speeds to use have been between 2.2 to 2.5 miles per hour.

A lot of Catfish keep coming into the shop. This has been the most catfish we have seen in any given year. Of course, Sandusky Bay is still producing the most, but now Dempsey Launch Access on the south side of the Marblehead Peninsula has also started to show signs of good fishing for channel catfish.

Until next week, have fun, stay safe and good luck. And as always, keep a tight line!