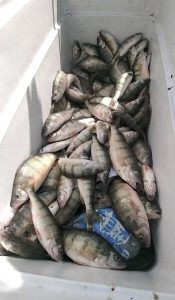 Limit catches of Lake Erie yellow perch have been caught by anglers who have been fishing around the Lake Erie Islands area in recent days.

The Lake Erie yellow perch fishing is on fire right now. How long have we been waiting to make that statement?

The big question right now is how long will the summer perch bonanza last after meager perch catches in spring and early summer. I’m hoping to give the walleye fishing a three- or four-week break while feasting on the excellent numbers of jumbo perch being hooked on perch and crappie rigs worked on or near the bottom of Lake Erie.

As the good news slipped out the last few days, perch anglers have been setting their anchors off Lakeside and Marblehead along the rocky drop-offs and using traditional perch tactics to report some limit catches. For fishermen who can find buckets of Emerald Shiner Minnows to bait their hooks, the perch fishing’s been fast and furious in some locations.

One of the top perch spots over the weekend stretched from Carpenter Point on the southwest corner of Kelleys island to Mouse Island, just off the Catawba Peninsula. The waters east of the Bass Islands have also been top spots, as well.

The perch bite has been best early in the day, with most fishermen filling their coolers with yellow perch, including quite a few 30-fish daily bag limits, during the prime fishing time of daylight to about noon.

Small packs of anchored boats are being spotted south of Green Island, south of South Bass Island and even around the markers off the Camp Perry Firing Range, where G Can has been especially productive. The fishing has been fair to good while anchored away from the packs of anchored perch fishing boats.

Bays Edge Fish Cleaning in Port Clinton has been hopping this weekend due to the yellow perch bite and the surprisingly large catches of perch.

The party fishing boats at Fishermen’s Warehouse in Port Clinton will return to perch fishing this week, adding an extra boat to its fleet to handle the demand for perch fishing.

The Lake Erie walleye were still biting, as well, last weekend. The trolling anglers and drift-and-cast fishermen have both been heading a bit east to catch their walleye around the Huron area right now.

Tru-Trip Diving Planers and small to medium-sized spoons have been taking lots of walleye, although in many areas the fishing crews have caught and gently released a lot of walleye that didn’t measure up to the 15-inch size limit. The daily walleye bag limit is six fish.

Spoons that are swimming 60 to 80 feet behind the diving planers and side planer boards had dominated walleye catches, although diving plugs, or crankbaits, are making a return. The crankbaits are generally working best about 120 feet behind the boat and weighted with 2-ounces.

Mark I Charters took a trip north to Canadian waters around Pelee Island with Jesse Simpkins from St. Croix Fishing Rods to test the company’s new line of walleye tackle. They had two great days of fishing with the new cutting-edge St. Croix casting rods, working lures in 16 to 23 feet of water.

As always, make your casts count and enjoy the great yellow perch fishing while it lasts around Western Lake Erie. And keep a tight line!