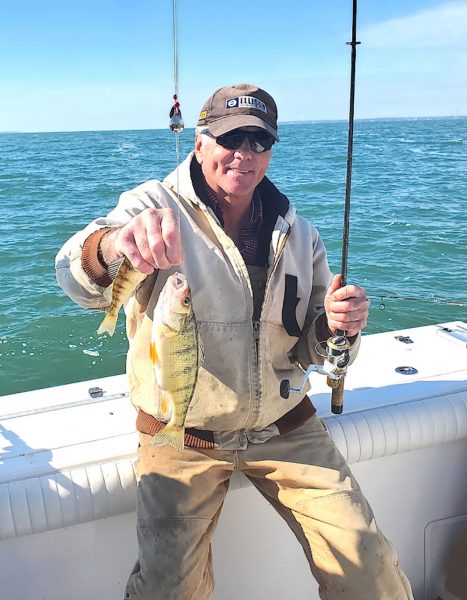 After a bit of a dry spell, the jumbo Lake Erie yellow perch have finally been biting around the Lake Erie Islands. The walleye fishing continues to be pretty good, as well.

Just like the weather, have all been hanging in the, waiting for the yellow perch to start biting in our back yard. When Mother Nature has decided that she wanted to play nice and give us some good weather, we have had some good days of fishing.

But then, because of the typical fall wind and weather, we have also had some days where Mother Nature made it impossible to do anything.

Capt. Randy Radabaugh of Mark 1 Sportfishing took a group of six people out this week and they caught a total of 130 perch. They were fishing on a line from the Perry Monument to the stone docks on the west side of Kelleys Island in about 30 to 32 feet of water.

Walleye are coming in with regularity to the east of Kelleys Island. The Cedar Point dumping grounds have still been the best place to be as well as a little to the west. The walleye are moving closer to shore. Tru-Trip diving planers and spoons have been the go-to combination to use for most anglers.

The guys fishing in the Fall Brawl, which runs through Dec. 1, have been trolling with crankbaits to hook the bigger fish, which have been rotating the waters east of Kelleys Island.

Night fishing for walleye has taken off over the last week or two. The docks in Lakeside and Catawba have been attracting after dark anglers and they have been doing really good. They are using chrome and blue Bandits and Huskie Jerk diving plugs.

We are going to be leaving some of our boats in the water until at least Thanksgiving, with the perch showing signs of starting to bite and the walleye are hanging around for the fall and winter, fattening up for their spring spawning season. We may also do one or two more weekly fishing reports, depending on how the bite continues around the Western Basin.

So until next time, keep a tight line!