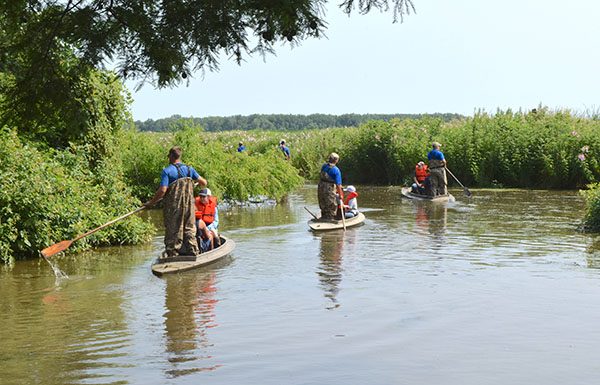 A crew of veteran marsh guides introduce young adventurers to the lush Winous Point Shooting Club Marsh in the Sandusky Bay region, touring the wonderful wetlands in “punt boats” used for waterfowl hunting in the fall and winter. (Photos by D’Arcy Egan) 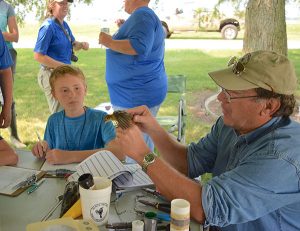 Kaiden Orcelletto is mesmerized as Mark Shieldcastle of the Black Swamp Bird Observatory and the U.S. Geological Survey bands a songbird that had been netted in the Winous Point Club wetlands.

For the 10th year, a crowd of youngsters toured the wonderful Winous Point Shooting Club wetlands to learn more about the local environment on a Day on the Wild Side program hosted by the Ottawa Soil and Water Conservation District.

It is a rare day when the public is allowed on the Winous Point Club grounds, but the exclusive waterfowl hunting marsh established in 1856 has always been dedicated to conservation, maintaining the local wetlands and helping youngsters to learn to love the marshland.”

“It’s a very popular outing,” said Becky Simpson of the Ottawa Soil and Water Conservation District. “It is so popular that we have to limit the crowd of fourth to eighth graders to 60 kids each year..”
The 43 volunteer experts from a variety of agencies make for a smooth, seamless tour of the stations that range from Life in the Marsh and fishing and microsampling to bird banding, law enforcement, archery and shooting. The agencies involved were the host Ottawa Soil and Water Conservation District, Ohio Division of Wildlife, Black Swamp Bird Observatory, U.S. Geological Survey, Sandusky Metroparks and Ohio State University Extension. 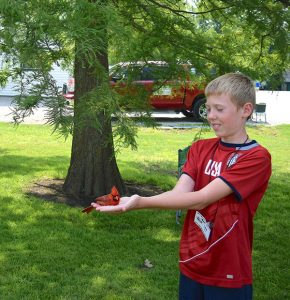 Caleb Howe has a banded cardinal ready for release during the Day on the Wild Side at Winous Point Shooting Club. The oldest waterfowl hunting club in the country.

For most of the kids, it will be the first time they have been ferried around a marsh in a punt boat, handled bow-and-arrow, cast a fly rod, plunked targets with a smallbore rifle or cradled a songbird in the palm of their hands to be released after it was banded.

They’re all unique experiences, a reason why the reservation list fills quickly with kids from around Ottawa County and neighboring counties. It also helps that the youngsters sit down together in a large pole barn for a communal lunch, and wrap up the day with ice cream sundaes and goodie bags of outdoor gear and information.