Zeitheim, a force at linebacker for Rockets, earns SBC honors 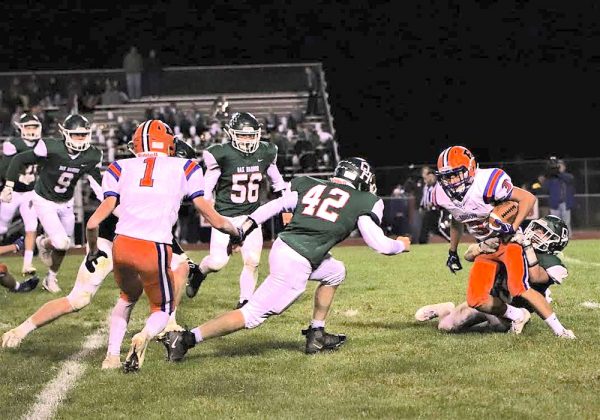 Oak Harbor linebacker Jack Zeitheim (42) was a defensive stalwart for the Rockets this year. This week he was awarded first-team honors in the Sandusky Bay Conference Bay Division. (Photo by Julie Overmyer)

On any given day, he certainly wasn’t the biggest player on the field, but Oak Harbor senior FB/LB Jack Zeitzheim was often the most impactful player.

Zeitzheim, a three-year starter, was a force on both sides of the ball this season, most notably at linebacker. He was also the H-back for the offense.

For his efforts this season, Zeitzheim earned first-team honors as a linebacker in the Sandusky Bay Conference Bay Division, and was given honorable-mention distinction as an end on offense.

“Jack stepped into the H-Back position this season as a starter. Our H-Back is our fullback, so that position is really a blocker and does a lot of the dirty work on offense. Just like on defense, he played hard every play and never complained even though he never got to carry the ball,” said Oak Harbor coach Mike May. “Jack will do anything to help the team win and he doesn’t care who gets the credit. That makes him a great teammate and a joy to coach.”

As a sophomore, Zeitzheim was thrust into action after an injury to Ryan Ridener late in the regular season. Zeitzheim made a key tackle in the Rockets’ 35-28 win over Orrville in a Division V regional final, sending Oak Harbor to the Final Four for just the third time in school history.

In that win over the Red Riders, Zeitzheim and fellow linebacker Ashton Schroeder made one of the key plays of the game, stopping all-Ohio running back Marquel Parks on fourth down late in the game to kill Orrville’s second-to-last drive.

“Probably one of my favorite moments was the Orrville game. I just loved that I got to play in the playoffs. I don’t know how I got that lucky. We played four, almost five playoff games, and that was easily my favorite part of my career. Stopping Parks was the game-defining play,” said Zeitzheim. “I missed football my freshman year. Those guys became my team, my family. That was probably my favorite moment. Also, this season was also one of my favorites because of how I played. I think it was the best season I ever had. I wish I could’ve played like that my sophomore year.”

“Jack has really good instincts and he always plays hard. He understands the game, which makes it easier to make in-game adjustments because he can get everyone lined up on defense,” said May. “I never saw Jack take a play off in practice or in a game. I always knew that our team would get his best effort and that he would always be ready to play.”

Zeitzheim finished with 100 tackles this season.

“It was a good season, I’m glad I got to experience it. Personally, I played pretty well. It was probably my best season. I just worked hard to show the underclassmen that if you work hard, great things can happen. I hope that they took something and look back on me and see that I was a good captain,” he said. “This season, it was a tough one for us. We made so many little mistakes, and that’s what got us to 5-5 and not 8-2 or 7-3. We kept trying to battle our way back into the playoffs; we came up short, but we never stopped fighting.”

Zeitzheim had 21 tackles in a 36-27 loss to Rossford, single-handedly keeping the Rockets in the game.

“Jack really stepped up in the Rossford game. We were without 11 players due to Covid-19 protocols, so we needed Jack to make even more plays to give us a chance,” said May. “He is a good leader because of the fact that he plays hard every play makes those around him better. He is a quiet kid, but his work ethic and toughness set great examples for the rest of the team.”

His first game against Port Clinton as a sophomore was quite nerve-racking.

“I remember my first game against Port Clinton, I couldn’t describe how nervous I was, I had to sit down,” Zeitzheim said. “That’s when I found out I really love playing. I always wanted to strive to be as good as them. I felt awful for Ryan, but thankfully he got a chance his last year. I’m glad I got to experience that opportunity.”

Zeitzheim is also a good wrestler. He was a district qualifier last year, was the Sandusky Bay Conference Bay Division runner-up at 160 pounds and won 31 matches.

“I think wrestling is probably going to be my favorite sport. I’m super close to making it to the upper level,” he said. “I think it’s easier because it’s more personal. In wrestling, it’s more on me. It’s however hard I want to work. Football is close behind.”

His father, Scott, who teaches eighth-grade science at the high school finished sixth in his senior year at 132 pounds.