Port Clinton High School welcomed more than 200 local residents to the 17th annual PCHS Holiday Breakfast with the Arts on Tuesday, Dec. 18, School district residents who were 60 and older enjoyed a breakfast followed by special performances of the PCHS Band, Choirs, and Orchestra.

The event showcases Port Clinton High School’s talented students and is a way to give back to the local community.

The guests were welcomed by Supt. Patrick Adkins and Principal Gary Steyer. After a breakfast prepared by Pam Bacon, Director of Food Services, and staff, guests were entertained by the Port Clinton High School Choirs under the direction of Eric Watts.

The orchestra under the direction of Brian Stitak also performed, as well as the concert band directed by Rod Miller. In addition, student artwork was on display presented by Art Teacher Gwen Harkelroad. STEM instructor Bobby Good had student projects on display. People were also invited to tour the newly renovated PCHS Choir and Orchestra rooms.   More pictures of the event are posted at www.pccsd.net or the Port Clinton City School District Facebook page. 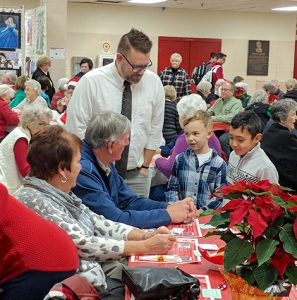