The Liberty Aviation Museum is housed in two buildings at the Port Clinton International Airport, and anchored by the Tin Goose diner, and has become a must see for everyone, not just those interested in airplanes.

A visit starts with a tour through the history of the Ford Tri-Motor, displays of memorabilia like Clark Gable posters, WWII uniforms, and model airplanes and boats. Moving to the large hanger you encounter a variety of classic vehicles. A restored 1963 Corvette, a couple of ‘57 Chevy Bel Airs, a forest green MG convertible, and a beautiful ‘66 cherry red Mustang convertible. All have been painstakingly restored and are on display. 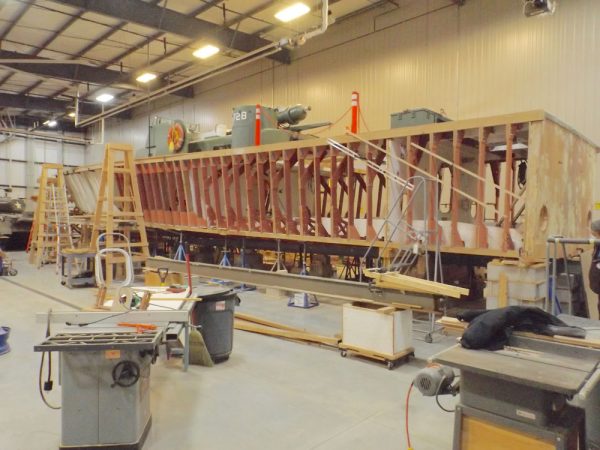 A side view of the PT-728 patrol boat restoration project.

After a short walk to the larger hanger, you’ll enter a treasure trove of WWII history. The first is PT (patrol torpedo boat) 728 boat. Built in 1945, the 70-foot craft was originally intended for the Soviet Navy, but the war ended and she was sold as war surplus.

The PT-728 had multiple owners before being sold to the museum in the spring of 2012. PT-728 is going through a keel-and-up restoration, and it is interesting to see the ribs of the boat showing like the ribs of a beached whale. A second one, PT-724, is dry docked outside.

The PT boats were made famous by the PT-109, an 80’ Elco PT boat last commanded by Lieutenant John F. Kennedy, future U.S President, in the Pacific theater during World War II. His actions to save his surviving crew after the sinking of PT-109 made him a war hero.

Next to the PT boat is a Sherman Tank. Officially designated as the M4 General Sherman, it was the main battle tank for the Western Allies, being employed not only by the U.S., but by the British, Canadian and Free French forces, as well. Interestingly enough, the tank was inferior to the German Panzers, but prevailed by its sheer numbers. A total of 49,324 Sherman tanks were produced in 11 plants between 1942 and 1946, compared to only 1,200 Panzers IV’s. 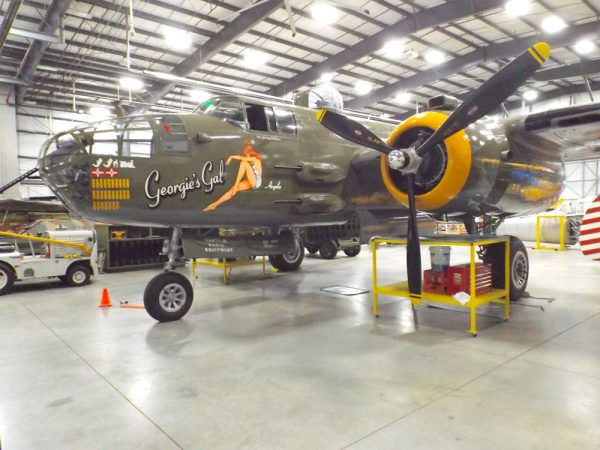 Moving into the main show area, A North American B-25 Mitchell bomber dominates the room. The B-25 Mitchell is a medium bomber that was introduced in 1941 and named in honor of Major General William “Billy” Mitchell, a pioneer of U.S. military aviation.

The B-25 was used in the first air raid by the United States on the Japanese capital of Tokyo on April 18, 1942. Sixteen B-25B’s, lead by Lieutenant Colonel James Doolittle, where launched from the aircraft carrier USS Hornet. It was the first air operation to strike the Japanese mainland, and demonstrated that the Japanese were vulnerable to American air attack.

Georgie’s Gal, The B-25 housed in the museum, was built in 1945 and never saw combat, but had an extensive history of civilian flight. In 2011, she was purchased by the Liberty Aviation Museum and was extensively restored.

Among other exhibits is a TBM Avenger. The most effective and widely-used torpedo bomber of World War II, the Avenger was the heaviest single-engine aircraft of the war. This one has the distinctive folded wings that mark it as a plane capable of taking off and landing on an aircraft carrier. 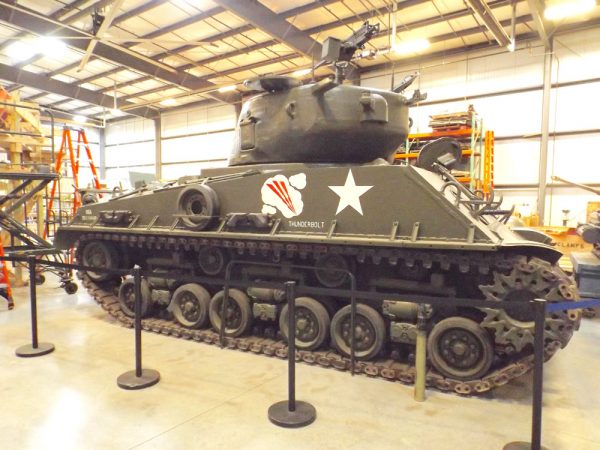 The tank the won the war – the M4 Sherman Tank.

Of course, no trip to the Liberty Aviation Museum is complete without a viewing of the Island Airlines Ford Tri-Motor. The 40th 5-AT to come off the production line in 1929, it is an important chapter in our nation’s fledgling commercial aviation history, and the Tri-Motor has a long history in Lake Erie Island area. Island Airlines operated from the Port Clinton Airport and served the islands of Lake Erie as “The World’s Shortest Airline.” Residents and visitors of the island depended on the airline for mail, supplies, transportation, ambulance and many other services.

The museum is a great stop and combined with a meal at the Tin Goose diner, a beautifully restored 1950’s diner, is a great way to spend a few hours learning about history – local and world. To get more information about the museum, or check hours and days of operation, go to www.libertyaviationmuseum.org, or call 419-732-0234.

The Tri-Motor Heritage Foundation in Port Clinton, is now selling personalized bricks to help support their Ford Tri-Motor restoration project. All brick orders placed by Saturday, May 15, are guaranteed 2021 placement in the “Island Airlines Historic Walkway” located at Liberty Aviation Museum. These bricks are a great way to honor your loved ones, business or special event that family and friends can enjoy for generations to come.

The tax-deductible donation goes directly to purchase materials needed for the aircraft. Two brick sizes are available. You can purchase the bricks online at www.RestoreTheFord.org or stop by the Liberty Aviation Museum PX gift shop.