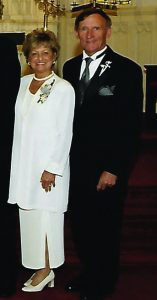 Von & Carol Ellis are celebrating their 60th Anniversary on Dec 30th. They were married on Dec. 30th, 1961, in Lakeside Methodist Church. Von was in The Marine Business his entire career with Lakeside Marine. Carol worked her entire career with office duties at U.S. Gypsum and Custom Canvas. They live in Lakeside & winter in Naples, Fla. They have 2 sons, Brandon and Devon and 3 grandchildren, Kyle, Colin and Kendall. They will take a cruise after the Pandemic.