Are you ready for some walleye? Central Lake Erie numbers are way up!

Preliminary results from the fall trawl survey in Ohio’s portion of the Central Basin of Lake Erie, which is completed later than in the year than in the Western Basin, show an exceptional hatch of walleye and an average hatch of yellow perch, according to the Ohio Division of Wildlife.

The Western Basin results released a few weeks ago had revealed a record-setting walleye hatch, promising many years of good walleye fishing in the future.

Results from the 2018 survey from the Central Basin indicate young-of-the-year walleye catch rates were the highest recorded in the past 20 years of the survey (32 fish per hectare). This year’s results, combined with the excellent 2015 year class, will ensure adult walleye abundance in the Central Basin will continue to increase.

Trawl survey results for yellow perch indicate the hatch was the highest observed since 2014 (40 fish per hectare) and just below the long-term average (45 fish per hectare) for the Central Basin. In the individual management units, the western portion of the central basin (Huron to Fairport) index was 28 fish per hectare, below the average of 42 per hectare.

The index in the eastern portion of the Central Basin (Fairport to Conneaut) was 51 fish per hectare, above the average of 41 per hectare.

Because of low oxygen conditions that are often present in the Central Basin, trawl surveys are conducted later in the year than in the Western Basin of Lake Erie.

Annual trawl surveys assess fish communities from Vermilion to Conneaut. Specific target species for the fall surveys include young-of-the-year and yearling yellow perch and walleye. Ohio central basin survey results, along with data collected by agencies from New York, Pennsylvania and Ontario, Canada, provide biologists with an initial estimate of how many young fish will enter the fishable population two years later.

During the upcoming months, assessment data from all Lake Erie agencies will be combined to estimate the hatches and the lakeside population size of walleye and yellow perch (individual basins) of Lake Erie. These estimates will be utilized to determine jurisdictional quotas. 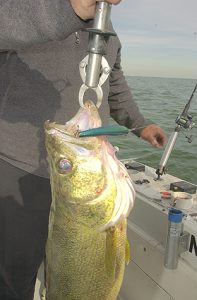