Bobby C. McConnell, 94, of Port Clinton, Ohio passed away Saturday, Dec. 1, 2018 at Otterbein North Shore, Lakeside, Ohio. He was born Aug. 4, 1924, in Sturgis, Ky., the second of six children of R. Clyde and Marguerite McConnell. His family moved to Akron, Ohio, at age 4 when his father decided to leave the coal mining town. He graduated from Kenmore High School in 1942.  Bob started working for Firestone Tire assembling anti-aircraft guns, later volunteering for the Army Air Corp where he was trained in Meteorology at Hamilton College in Clinton, N.Y..  While studying Meteorology he met his future wife, Helen, at a USO dance.

He served in the South Pacific during WWII.  After discharge from the Air Corps, he returned to Akron and resumed working for Firestone curing tires on the night shift. He also attended Akron University for his degree in chemistry.  At this time, he married the love of his life Helen Kinne.

After receiving his degree, Bob was promoted to the Firestone Synthetic Division, where he held positions including Chief Chemist and Technical Director.  In 1968, he moved to Port Clinton where he worked for Standard Products Company.  He finished his career working with Helen selling real estate for Helen McConnell Realty.

Bob was very active in Port Clinton organization including: The Elks Lodge #1718, Catawba Island Club; Trinity United Methodist Church; Playmakers Civic Theater; Men’s Prayer Breakfast; and Rotary.  In Rotary he served as President for two terms, was a 50-year member, was named a Paul Harris Fellow and received the “Service Above Self Award.”

Funeral services will b e conducted 11 a.m. on Saturday, Dec. 8, 2018 at Neidecker, LeVeck & Crosser Funeral Home, 1124 Fulton St. Port Clinton, Ohio where visitation will be held Friday from 2-4 p.m. and 6-8 p.m. Interment will be in Catawba Island Cemetery.  Memorial contributions may be given to Playmakers Civic Theater or Port Clinton Rotary Club.  Online condolences may be shared with the family at www.neideckerleveckcrosser.com. 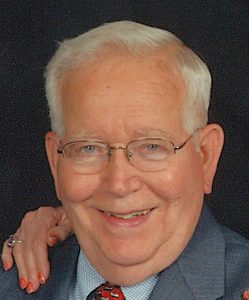