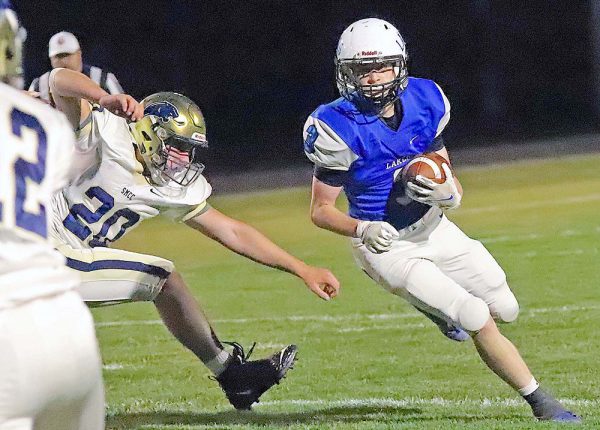 DANBURY TWP. — Danbury was clicking on all cylinders on Friday night, and it showed in the Lakers’ 42-12 victory over visiting St. Mary Central Catholic.

Danbury (7-0) took control from the outset, recovering an onside kick and scoring four plays later, with Will Tibbels running for a touchdown from eight yards out. Kaden Conrad ran in the two-point conversion to give the Lakers an 8-0 lead and they never looked back.

After the Panthers got the ball back, they fumbled on their third play of the drive, and Brandon Wunder recovered it. On the next play, Conrad took the pitch off a reverse and found Cole Shortridge deep for a 49-yard touchdown. Conrad ran in the two-point conversion to push the lead to 16 points.

The final score of the first quarter was a 6-yard touchdown run by Conrad, which came with 5:39 remaining.

“We were executing really well. We’re doing things offensively and defensively that we weren’t doing in our first few weeks. We have more answers to potential scenarios,” said Danbury coach Keith Mora. “We as coaches are getting game experience and we’re changing things up for our kids to have a better opportunity.

“I feel like we’re healthy, which is nice. We’re probably the healthiest we’ve been in a couple of weeks.” 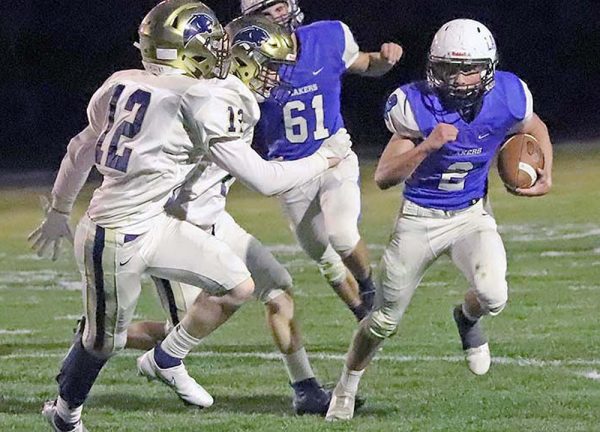 Danbury High School running back Will Tibbels outruns a Sandusky St. Mary’s defensive back and heads upfield for a large gain in last Friday’s football game at Biro Field. The Lakers were victorious, 42-12. (Photos by John Kozak)

“I think we are trying to toe that line to Wing-T football. If I told you our plays — the buck sweep, power, trap — it’s like the Wing-T. Our passing game looks a little like a Wing-T passing game. It’s not a one-trick pony,” said Mora. “You can’t easily replace a guy like Cole Shortridge. At the end of the day, we can put the ball in four different people’s hands. It definitely forces a defense to game plan for our running backs.”

In the second quarter, Mischler scored on a 2-yard run to finish off a nine-play, 69-yard drive to make it 28-0. Tibbels scored on a 15-yard run with 2:09 to play in the first half to complete an eight-play, 79-yard drive.

“I think we’ve yet to put together our best game but, as a whole, our line is playing better,” said Mora. “When we run the ball for 600 yards in a game, the offensive line is destroying people, and it’s about our ability to communicate and having the players talking to each other.”

The game was delayed for over an hour because the officiating crew had opted out of calling the game due to the coronavirus. Officials were called in from Toledo, and the game began at about 8:20 p.m.

The Lakers have a bye this week.