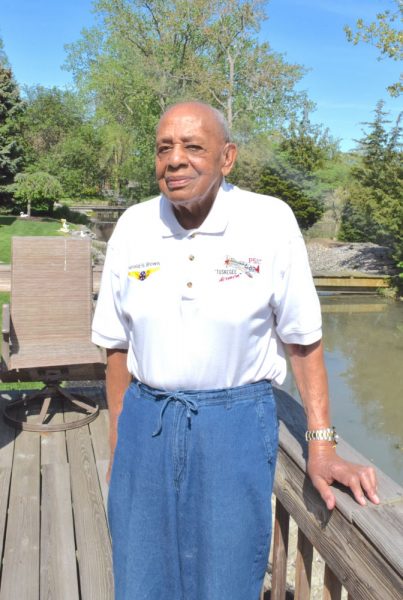 A member of the famous Tuskegee Airmen during World War II, Lt. Col. Harold H. Brown, 98, of Catawba Island, “took his final flight in the skies” on Thursday morning, said his wife, Marsha Bordner, and passed away peacefully. (Photo by D’Arcy Patrick Egan)

A celebration of Harold Brown’s long, amazing life will be held on Saturday, March 4 at 12:30 p.m., at Port Clinton’s Aviation Museum.

In his earlier years, the World War II hero had expected to be buried in Arlington National Cemetery. More recently he had decided that “Port Clinton is my home, and I want to be buried there,” and will be interred at Catawba Island Cemetery, said Bordner.

Brown was born in Minneapolis in 1924 to John and Allie Brown. When he graduated from high school in 1942, he enlisted in the military with the goal of becoming a pilot, a dream of his since sixth grade. Brown went to the Tuskegee Institute in Alabama for training to become a Tuskegee Airman. At the age of 19 he graduated from the segregated pilot training program and was commissioned as an officer in the then U.S. Army Air Corps in 1944. 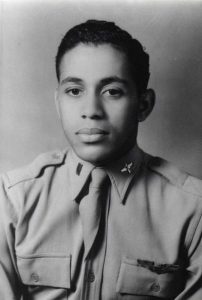 Young Harold Brown graduated from the segregated pilot training program at the Tuskegee Institute in Alabama in 1944 and was commissioned an officer in the U.S. Army Air Corps at the age of 19.

During his time in combat, he completed missions strafing targets on the ground and protecting bombers in the air. On his 30th mission, he was shot down over Linz, Austria, and was forced to bail out of his badly damaged P-51 Mustang. He was taken as a prisoner of war.

After World War II, Harold returned to Tuskegee as a Flight Instructor. He was transferred to Lockbourne Air Force Base in Columbus, Ohio, and later served in Japan during the Korean War.

Brown left active duty in 1965 at the rank of Lt. Colonel and turned his eyes to education. He received a degree in mathematics from Ohio University and earned a doctoral degree from The Ohio State University. Brown translated his love of aviation education to a love for engineering education. He took a position at Columbus Area Technical School, becoming Chair of the Electrical Engineering Program, and eventually retiring as Vice President of Academic Affairs at Columbus State Community College.

Brown and the other Tuskegee Airmen, through their superlative service during World War II, paved the way for desegregation of the military. In 2007, the Tuskegee Airmen were awarded the Congressional Gold Medal in Washington, D.C.

To keep the tremendous story of the Tuskegee Airmen alive for the next generations, Brown and Bordner published Keep Your Airspeed Up: The Story of a Tuskegee Airman, in 2017.

In addition to his wife, Marsha, Brown leaves behind a daughter, Karen Jackson (Savannah, Ga.), step-son Jonathan Bordner, and his two grandsons, Dashiell and Simon Bordner.

Harold was baptized as an older adult and was a member of Firelands Presbyterian Church.