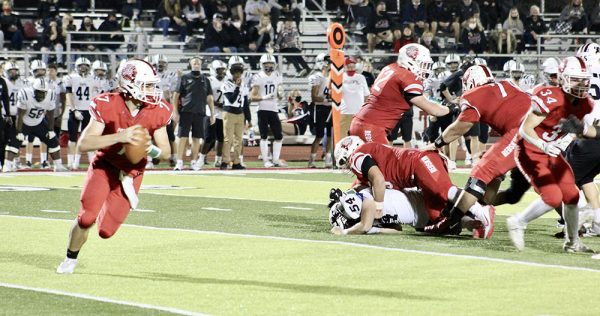 PORT CLINTON — Port Clinton withstood a stiff challenge from Perkins before rallying to defeat the visiting Pirates, 40-21, on Saturday in the first round of the Division IV, Region 14 playoffs.

Redskin running back Garrett Cornell led the ‘Skins, carrying the ball 22 times for 164 yards and four touchdowns as Port Clinton (4-3) slowly pulled away in the fourth quarter. Cornell also recovered a fumble on defense and stopped the Pirates from converting on a fake punt.

Perkins (2-5) led 7-0 and 14-7, respectively, before the ‘Skins rallied to tie it twice in the first half to go into halftime with the score knotted at 14.

The key play of the game came early in the third quarter when the Pirates were about to take back the lead. Quarterback Chris Campbell hooked up with Jayden Rowe, who caught the ball before being hit by Owen Auxter and fumbling the ball at the Port Clinton 2-yard-line. It was recovered by Cornell, who also plays linebacker, and returned to the 39 with 8:52 remaining in the third.

The ‘Skins scored on the ensuing drive to take the lead for good, marching 61 yards in 10 plays and Cornell scoring a touchdown from 26 yards on third-and-4. Andrew Hanson’s extra point made it 21-14.

On the Pirates’ ensuing drive, they faced a fourth-and-3 at the Port Clinton 48 and tried to execute a fake punt, but the pass from Jaythen Jude-Rowe was deflected by Cornell.

Perkins forced a punt and took over at its own 31, driving to the Port Clinton 30. On fourth-and-2, Campbell was stopped a yard short by Alex Rumbarger, who led the team with nine tackles. Five plays later, Cam Gillum faked a handoff to Cornell, rolled left and threw across his body to Josh Hurst, who caught it in the back of the end zone for a touchdown. The extra point was blocked, leaving the ‘Skins with a 27-14 lead and 9:34 to play. 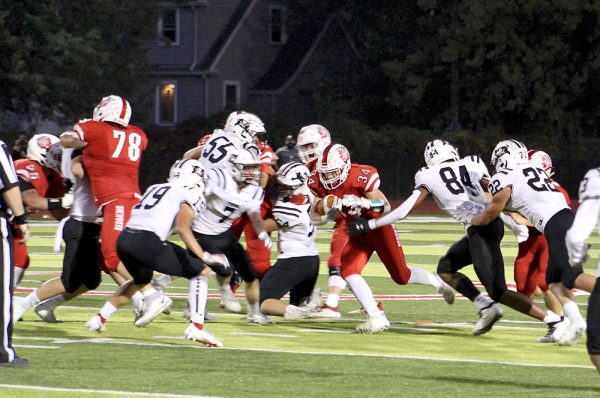 Port Clinton running back Garrett Coleman breaks through the defensive line for a first down. Coleman powered the ‘Skins on Saturday night with 22 carries for 164 yards and four touchdowns.

“Alex had a big game defensively. He led the team in tackles last year He’s consistent, he reads well and he’s an excellent tackler, “ said Port Clinton coach Beau Carmon. “Defensively, it’s not the fact that we were getting outplayed, but they had tall wide receivers and a quarterback that could sling it. Our coverage was excellent, and then the quarterback got hurt and he didn’t run it particularly well in the second half. We were there for our coverages, but they made big plays. We stopped their running game.”

Trailing by 13 points, the Pirates responded, driving 66 yards and scoring on a 53-yard pass from Campbell to Sam Siegel with 7:48 remaining. Tyler Yingling’s extra point made it a six-point game, and Perkins forced a fumble on Port Clinton’s next play from scrimmage.

The Redskin defense held, forcing a punt, which traveled just 15 yards. After getting the ball back, Cornell carried the ball three times for 38 yards, finishing it off with a 16-yard touchdown run with 4:21 to push the lead to 33-21.

Port Clinton would force another punt and Cornell scored again, this time on a 38-yard touchdown scamper with just over one minute remaining.

“I thought by the time halftime came around, we were in control. But it wasn’t showing on the scoreboard because Perkins made some big plays. Ultimately, we showed that we were able to run the football and control the line of scrimmage. Nine times out of 10, that’s going to win the football game, “ said Carmon. “It was definitely a momentum game. We were able to stop them with some big defensive plays. It was nice to score some points against a good Perkins team.”

Cornell and Carmon said the offensive line wore down the Pirates.

“We like to take shots down the field,” said Carmon. “We have a big offensive line and a quarterback who thrives on play action. I’ve felt our line is our biggest asset. Cam Gillum was 8-of-11 for 101 yards, and we were able to run the football.”

“Going into the game, we knew as a whole that we were going to be able to run the ball and with our offensive line being big and strong,” Cornell said, “it made it really easy to wear them down pretty fast.”

Port Clinton travels to Van Wert, seeded fifth in Region 14, on Saturday to continue its playoff push. The Cougars, who compete in the Western Buckeye League, are 5-1.

“They average 40 points and have the No. 1 pass defense in the WBL. Their quarterback threw for 1,700 yards this year, has a very strong arm and is elusive. Playing the game against Perkins helped us a lot because he’s mobile quarterback that has a nice arm,” said Carmon. “It’s a different offense, they spread the ball all over the field. It’ll be a fun game to watch. We’ve got our hands full. There’s a reason they’ve only lost one game.”