Here Come the Mummies to kick off Rock the Light 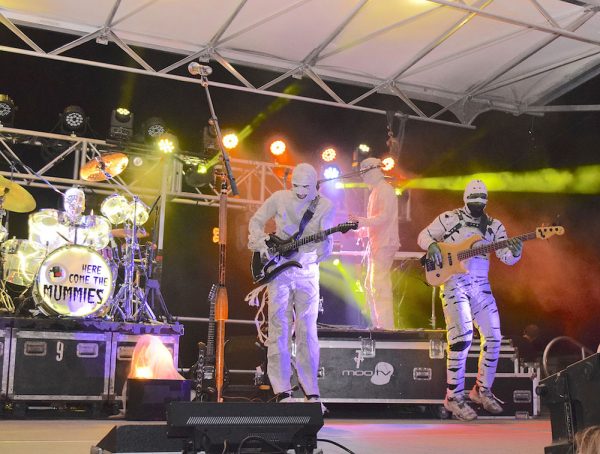 Here Come the Mummies are an eight-piece funk-rock band of 5,000 year-old Egyptian Mummies with a one track mind, say their managers. What they were a year ago was a major league hit at the Rock the Light concert in Waterworks Park in Port Clinton, and they’ll return on Sept. 6 to have everyone dancing in the aisles.

Port Clinton’s Rock the Light concert will unleash a bevy of great bands on Sept. 6-7 in Waterworks Park, and in the early spotlight will be Here Come the Mummies, a funk-rock band with plenty of brass that has been getting rave reviews all around the country.

“If you haven’t seen Here Come the Mummies yet, you’re in for a treat,” said music promotor Ron Miller of The Listening Room. “They’re attracting big crowds wherever they perform.”

Tickets for the two-night concert are $60, $150 for VIP tickets. A Friday night ticket is $30, with Saturday night tickets — Jefferson Starship is the headliner — costing $40.

Some say Here Come the Mummies are under a curse from long ago for dallying with a great Pharoah’s daughter. Others claim they are reincarnated Grammy-winning studio musicians. Whatever, no one is allowed to witness their pre-concert sound check, and the band members will be in seclusion before the concert.

When they roll off their tour bus in mummy garb, though, they beat lighted drums and march through the middle of the audience, a quick start to an “unrelenting show that will bend your brain, and melt your face,” say handlers.

The Mummies did get together to answer a few questions from The Beacon, though.

Q: What’s New? What new Mummies songs should delight the Port Clinton audience?
Mummy Cass: We keep working in new stuff from our latest CD, “All Excess.” You never know what we’re gonna haul out.

Are there any new tales from the crypt that have popped up of late?
Mummy Cass: Plenty. We have taken over so much of the US, that we’re headed to Canada next week, by way of Chicago. And we just sold-out a bunch of shows earlier this year. So things are kinda rockin’.

Here Come The Mummies have wowed crowds by walking from their tour bus and, beating the drum, through the crowd en route to the stage. Is the close and personal HCTM entrance still thrilling the crowds?
Mummy Cass: Of course it is. Everybody needs a little foreplay, dig?

Could they really be incarnated Grammy award-winners coming back from the grave?
Mummy Cass: It’s very possible. It’s even probable. Can I say more? Nope.

Could the Mummies mysterious personas, cunning songcraft and unrelenting live show really bend brains and melt faces?
Mummy Cass: Baby, this is figurative, it’s for effect. If we literally bend your brain, get help.

Does Scott Baio admit to being the brainchild of HCTM?
Mummy Cass: Privately, yes. Publicly, no.

How tough is it to keep all of that swaddling wrap clean and semi-neat?
Mummy Cass: Baby, we carry our internal organs around in clay pots, and our brains were pulled out through our noses. Keeping things neat has gone out the window.

What are some of the favorite potions that HCTM consume?
Mummy Cass: Coffee, lots of coffee. Strong coffee. And a little kombucha, here and there. “Boochin’” it up left and right.