Historic Harrison Portage and War of 1812 featured at Waterworks Park 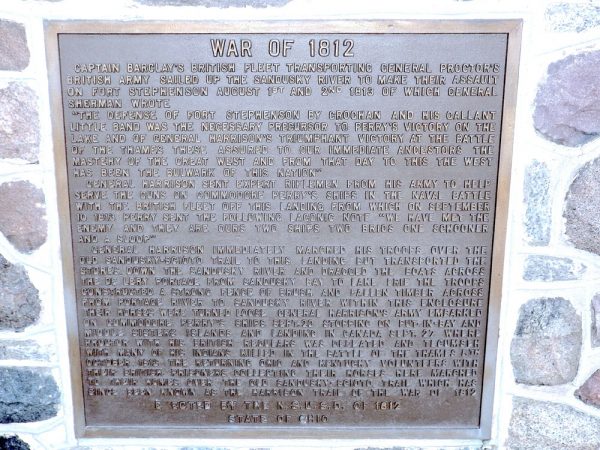 Two pyramidal monuments of boulders stand two miles apart at either end of what is known as the De Lery Portage of 1754. One monument marks the site of Old Fort Sandoski (Sandusky), and faces Sandusky Bay, opposite the mouth of the Sandusky River.

The other, the Harrison Perry Embarkation monument, overlooks Lake Erie near the old mouth of the Portage River at the Eastern end portion of Waterworks Park. These markers, together with the short land portage connecting them, teem with history as absorbing as any in this country.

The Harrison Perry Embarkation monument north of the intersection of East Perry Street and Fulton Street, sits as an historical marker located at the northern end of the De Lery Portage.

On Sept. 20, 1813, General William Henry Harrison, a future U.S. president, marched his troops, including a contingent from Port Clinton, over the Old Sandusky-Scioto Trail to this landing. He transported his supplies down the Sandusky River and dragged the boats across the De Lery Portage.

On Oct. 5, Harrison’s troops defeated the Shawnee Indian Chief Tecumseh’s 1,000 warriors and 500 British regulars in the Battle of the Thames near Chatham, Ontario. Tecumseh was killed, which led to the collapse of his Indian confederacy. Tecumseh’s death marked the end of Native resistance east of the Mississippi River, and soon after most of the depleted tribes were forced west.

The battle gave control of the western theater to the United States in the War of 1812.

Wrote Harrison, “This assured to our immediate ancestors the mastery of the Great West and from that day to this the west has been the bulwark of this nation.”

The returning Ohio and Kentucky volunteers, with their British prisoners, marched to their homes over the old Sandusky-Scioto Trail, which has since become known as the Harrison Trail of the War of 1812.

As an interesting sidenote. the name “Put-in-Bay” originally only referred to the harbor because it was “shaped like a pudding bag with a soft bottom.” Sailors used the slang phonetic term, ‘puddin’ or pudding bay; which was simply a slang phonetic variant.