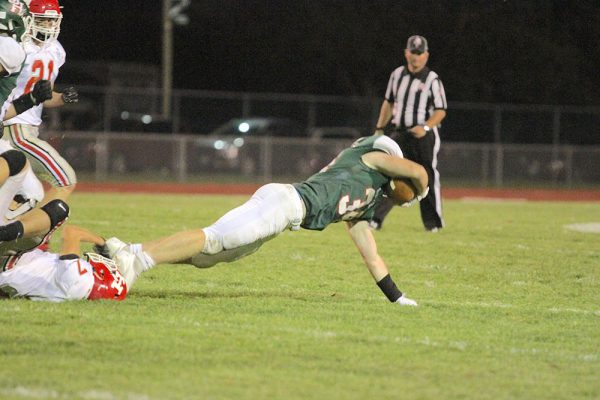 Running back Collin Fauver is tripped up by a Huron tackler. (Photo by Julie Overmyer)

OAK HARBOR — If the first play from scrimmage was any indication of what was to come on Friday night, Huron would’ve been in trouble.

On first-and-10 from the Tiger 22-yard-line, Huron quarterback Cole Parker, unaware that the ball had been snapped, saw it bounce off of him and Oak Harbor linebacker Ryan Ridener recovered the ball at the 21.

But the Huron defense held, with the key play coming on fourth-and-9 from the 20 when J.J. Holliday sacked Rocket quarterback Ashton Schroeder for an 11-yard loss in the Tigers’ 35-21 victory over Oak Harbor.

Two plays later, Parker connected with Richie Delaney, who caught five passes for 103 yards, on a wheel route deep down the right sideline for a touchdown that covered 64 yards with 9:31 to play. Abram Fortune connected on the first of five extra points to give the Tigers the lead for good at 7-0.

Just before the end of the first quarter, Jacob Lamb returned a punt 83 yards for a touchdown to increase the margin to 14 points with nine seconds left. Lamb caught the ball at the 17, darted left, picked up a key block and raced down the left sideline before cutting it back toward the middle of the field and pulling away for the touchdown.

Big plays killed Oak Harbor as four of Huron’s five touchdowns covered at least 52 yards. On the flip side, the Rockets just missed on some big plays with deep throws that were nearly completed.

“We knew stopping the big plays would be a key. The quarterback is a really good athlete, they have some good wide receivers, and we knew they were going to be able to make plays,” said Oak Harbor coach Mike May. “We had a lot of missed opportunities. Early on, there was a big momentum shift when we got the fumble and weren’t able to score. We had a hard time trying to get back in the game.” 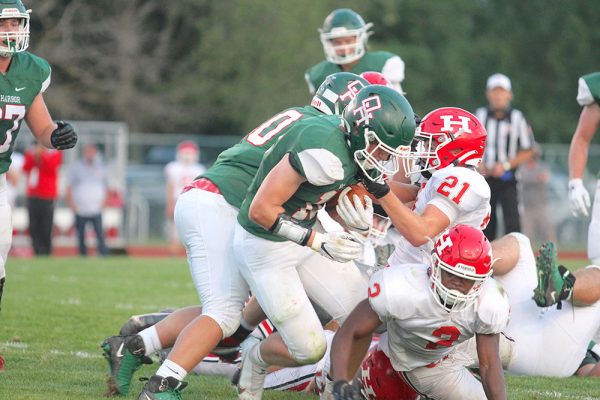 Ryan Ridener managed to get Oak Harbor off to a good start, recovering a fumble by Huron quarterback Cole Parker on the first snap of the game. (Photo by Julie Overmyer)

Trailing 14-0, the Rockets (1-2, 1-1 Sandusky Bay Conference Bay Division) fought back and Robert Jacobsen intercepted a pass after Huron had driven to Oak Harbor’s 30, setting the Rockets up at their own 16 with 9:29 to play in the first half. Oak Harbor drove 84 yards in 14 plays, scoring when Schroeder found Collin Fauver for an 18-yard touchdown on fourth-and-3 with 2:46 remaining. On the play, Schroeder rolled right before looking left and finding Fauver in the end zone for the score.

Then a key sequence in the game occurred as Huron’s defense came up big with a key stop and gave the offense the ball back with enough time to score.

The Tigers drove to the Oak Harbor 39 before the drive stalled with 1:49 left to play. Huron punted the ball deep to the Rockets, pinning them back at the 10. The Tiger defense held, allowing just 22 seconds to run off the clock before taking a timeout and getting the ball back at the Oak Harbor 45 with 1:27 remaining.

Parker went 3-of-3 on the drive with the touchdown coming on an 18-yard connection with Kaden Staley with 34 seconds to play. On second-and-8 from the 33 the Rockets were called for pass interference, and Huron scored on the next play.

On the first drive of the second half, Dylan Hohler intercepted a pass and returned it 62 yards for the touchdown. At that point, Huron had the momentum and a 28-7 lead with 10:24 remaining in the third quarter.

The teams traded a couple of possessions before Oak Harbor scored a touchdown with 9:44 to play when Schroeder scored on a quarterback sneak from the 1. On the drive, Schroeder hit Fauver with a deep pass to set up the Rockets in the red zone.

Oak Harbor recovered the onside kick and took over at the Huron 48. A 36-yard pass from Schroeder to Tyler Wadsworth got the Rockets to the Huron 12, and Fauver scored four plays later on a 1-yard touchdown run to cut the deficit to 28-21 and swing the momentum in the Rockets’ favor.

But the Tigers (3-0, 2-0) responded, driving 74 yards in three plays with Parker, who accounted for 234 yards of total offense and three touchdowns, scoring on a 51-yard run with 5:33 to play. The touchdown was set up on the previous play by Holliday, who gained 33 yards on second-and-17 from the 19.

Despite the loss, the Rockets might be able to find a silver lining in knowing that they didn’t give in despite trailing by 21 points in the fourth quarter.

“That’s the first thing I talked to the kids about after the game. Even though we had dug ourselves in a hole, they really fought hard to be down seven points with about six minutes left,” said May. “Then Huron hit a couple of big plays and scored, but I thought our kids battled.”

On Friday, Oak Harbor travels to Milan to face Edison, which is 2-1. The Chargers, who employ the triple-option offense, defeated Willard, 57-8, last week.

“Their offense is always concerning. It’s a different style of offense and it’s difficult for the scout team to replicate that,” said May. “It forces your defense to play very disciplined.”