Jefferson Starship to Rock the Light!

Main Street Port Clinton announced on Monday that Jefferson Starship, one of the most iconic rock bands of all time, will headline the two-day Rock the Light concerts at WaterWorks Park on Sept. 6-7, 2019.

“Main Street Port Clinton is thrilled to bring this festival back to WaterWorks Park, and we will be making plenty of big announcements about next year’s festival over the course of the next few months,” said Joe Miller of The Listening Room in Port Clinton. He said the rest of the stars coming to Port Clinton for the Rock the Light concerts will be announced soon, and the news and ticket prices will be available on the new Rock the Light website, rockthelightpc.com.

Main Street Port Clinton needs to keep the all-star lineup under wraps for a few more weeks. As the festival continues to expand, though, there will be a second stage added to the festival for a more up close and personal, party-like experience featuring some local and regional bands.

That list of familiar talent includes The Eric Sowers Band, Athens Wheeler, Master TC and the Visitors and Miss Kitty and the Litter.

Jefferson Starship is a band that has received a Lifetime Achievement Award at the Grammys, said Nikki Adams, and has dozens of top 10 hit records. “They’re going to help us build this festival on great rock-n-roll music.”

With its roots coming from the hugely popular Jefferson Airplane, Jefferson Starship has sold millions of albums, said Nicole Kochensparger, and is noted for such songs as “We Built This City,” and “Somebody to Love,” “Nothing’s Gonna Stop Us Now,” “Sara,” and “Miracles.” 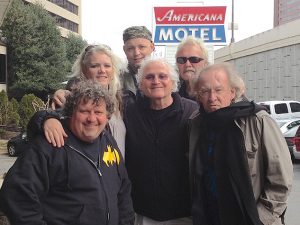 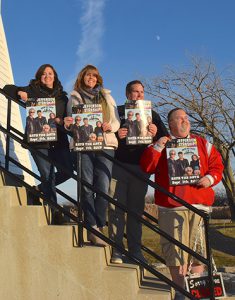 Main Street Port Clinton announced Monday afternoon at the Port Clinton Lighthouse in WaterWorks Park that Jefferson Starship will be the headliner for the Rock the Light concerts there on Sept. 6-7. From left to right are Nicole Kochensparger, Nikki Adams, Joe Miller and Mike Snider. (Photo by D’Arcy Egan)