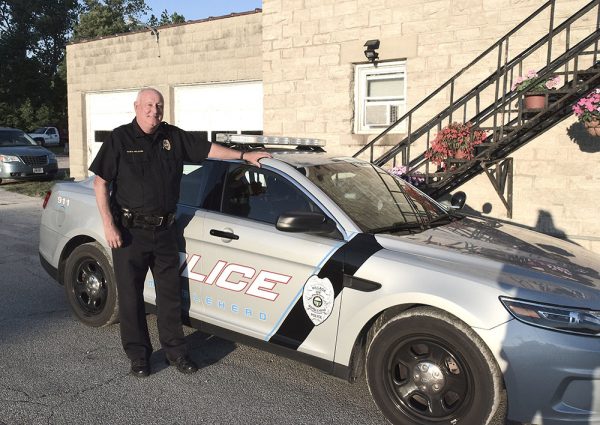 The Village of Marblehead made Kenn Thellmann an offer he couldn’t refuse.

The retired police chief of Walton Hills, Ohio, just south of Cleveland, Thellmann and wife, Lisa, decided to spend retirement on the Marblehead Peninsula after his 38 years of police work.

Not quite willing to make a clean break, two years ago Thellmann became a seasonal police officer for the Marblehead Police Department, a part-time summer position to help out when the crowds of tourists arrive.

“My wife and I bought a summer house in the West Harbor area about three years ago, and we still own a home in Valley View, in the Cleveland area,” he said. “Working as a seasonal was nice, but I have to admit I missed the police work.”

In Walton Hills, Thellmann had worked his way up from being a part-time dispatcher in 1979 to a full-time sergeant in 1990, a lieutenant in 2000 and a headed the regional SWAT Team in the suburbs just outside Cleveland. He was known for his all-around ability as a police officer, as well as a penchant for training officers and SWAT Team members.

“Kenn had quite the resume and background to take over for Chief Joy,” said Bird. “He’s a graduate of Youngstown State University with degrees in law enforcement and business, credits for a Master’s Degree from the University of Virginia, and attended the FBI Academy.

“After he retired from Walton Hills, he kept his police certification, just in case he wanted to get back into police work on some level. When he started with us, he first worked as a volunteer without pay.”

Thellmann loves the Marblehead Peninsula, and boating and fishing on Lake Erie. He enjoyed working with the other Marblehead officers. There are four full-time officers, and a couple of seasonal officers who work 16 hours a week in summer.

For an officer with Thellmann’s background in police work, Bird thinks the village was extremely lucky to convince Thellmann to take the job.

“Kenn is real community and people-oriented,” she said. “Nothing in police work phases him, whether it is working with businesses, residents or visitors. He has some outstanding ideas for community programs, and he and the other officers work well together.”

Thellmann thinks the police department is in good shape right now, but he knows there will be work to do.

“There is going to be a lot of training involved, and that’s something I’ve done my entire career,” said Thellmann. “Policies and procedures will be covered, including physical contact with the public.”

The COVID-19 pandemic is also a thorn in the side of public officials.

“You never know, from day to day, what’s going to be shut down or opened up,” said Thellmann. “That’s going to keep everyone on their toes.”