A popular Port Clinton councilman for almost eight years before resigning in August 2015, local realtor Mike Snider announced Monday night that he would be running for the Port Clinton mayor’s seat in the May 7 primaries.

“I have strong ties to this community, and love this town,” said Snider, a Republican. “I have chosen Port Clinton to be my home town, though I could live just about anywhere. I’m here for the long haul, with deep roots in this community. I love being involved and trying to make Port Clinton a better place.

Wargo is the present magistrate for Municipal Court Judge Frederick “Fritz” C. Hany II, who was  first appointed in 1991 at the age of 31 and has since been re-elected four times to this court.

While petitions to the Ottawa County Board of Elections are not due until Feb. 6, Snider had a reason for declaring his candidacy so early.

“The moment someone announced they were going to run for mayor, the current mayor (Hugh Wheeler Jr.) started becoming a candidate,” said Snider. “I wanted to give Mayor Wheeler all the time in the world to make Port Clinton a better place. If he’s successful, then the whole town is successful.”

Snider is known as an avid Ohio State University sports fan, a volunteer at the Port Clinton Fire Department, a member of Kiwanis and is involved with many of the community festivals held throughout the year. His biggest success was the inaugural two-day Rock the Light Festival on Sept. 7-8, which is already finalizing plans for 2019.

Snider said he developed his list of priorities for Port Clinton with the help of two decidedly different focus groups. From May through September, a group from a Port Clinton High School government class, as well as a group of adults of all ages, met at The Listening Room at Our Guest Inn, the site of Monday’s press conference, to determine the top five issues facing Port Clinton.

“Surprisingly, the youngsters and the adults voiced the same issues,” said Snider. “The top issues of both groups were the attitude of citizens, downtown revitalization, job creation, city finances and roads and infrastructure.” 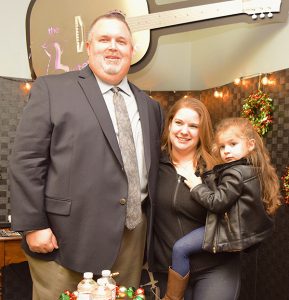