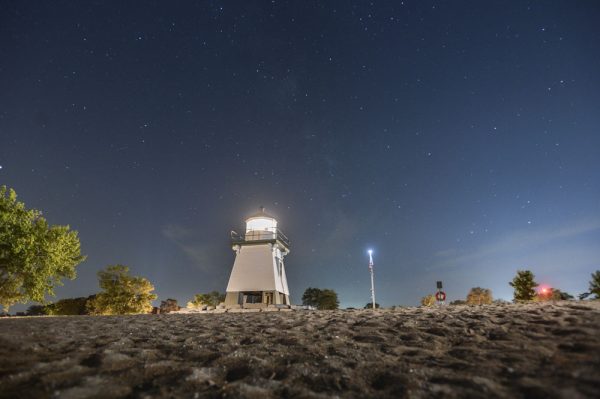 As photographic artist David Zapatka hauled gear to the base of the Port Clinton Lighthouse onTuesday, Aug. 23 and darted through the sand to move lights, adjust his tripod, check camera settings and, searching for the Milky Way on a phone app, he highlighted a simple lesson.

It takes science, skill and courage to capture beauty.

The iconic Marblehead Lighthouse was the first. 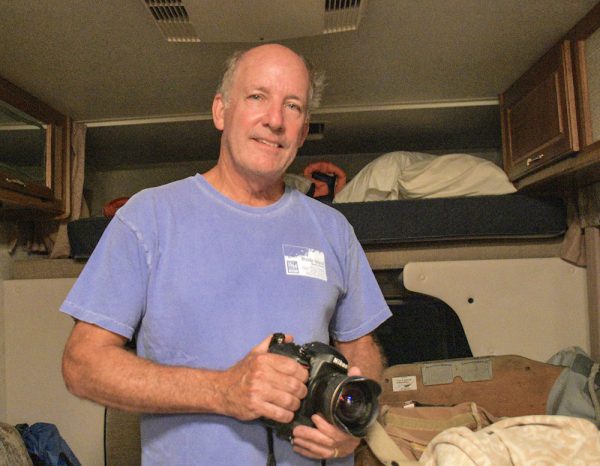 David Zapatka is an award-winning freelance news and sports videographer who is on a mission to photograph all of the country’s remaining working lighthouses at night. Here, he stands with his camera inside “Ruthie,” the RV he drives around the country from lighthouse to lighthouse. (Photo by Sheri Trusty)

Photographing lighthouses at night is challenging and, at times, dangerous. To capture the structures as they would have been viewed in their earliest years, when they cast beams into the pitch blackness, Zapatka must sometimes tote his camera across slippery rocks or into deep waters with nothing but a headlamp to guide him. In his tool kit is a safety helmet, a floatation device, ice crampons and an emergency position-indicating radio beacon (EPIRB) to connect with rescuers in case of emergency.

“I sometimes photograph lighthouses alone, in the dark,” he said. “There’s a risk.”

Zapatka’s willingness to take those risks is creating a gift to America. “USA Stars & Lights” is the first nighttime lighthouse photography project of its kind because nighttime shots like the ones Zapatka creates were not possible with film cameras.

Zapatka realized the significance of his work when he showed a nighttime lighthouse photo to members of the U.S. Coast Guard.

“When I showed the Coast Guard my photo, they were amazed with what I shot. I didn’t know why they were so excited, but then I learned there are no nighttime photos of lighthouses in history,” Zapatka said.

Now Zapatka is scrambling to photograph all of the approximately 800 working lighthouses left in the country before they disappear. 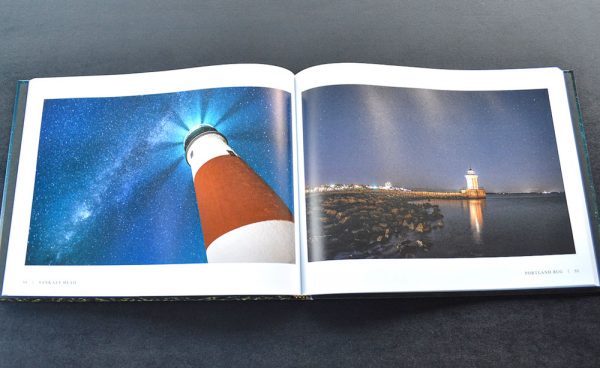 “In the early days of lighthouse construction, people started winging it. They put some where they didn’t belong, and they were lost to the water, and some were not built the right way. Now, with GPS, they are becoming obsolete, and the Coast Guard is selling them,” Zapatka said. “I’ve made it my mission to capture them before they are gone.”

The Port Clinton Lighthouse was almost lost as well. It sat on private property for decades before the Port Clinton Lighthouse Conservancy (PCLC) was created to restore the structure. It was moved to its current location on the Lake Erie shore in 2016. The PCLC received an unexpected honor for its efforts when Zapatka immortalized the lighthouse in his “USA Stars & Lights” project.

“David’s project will hopefully give Port Clinton some national recognition as a waterfront destination, and since the lighthouse has only been back on the waterfront for six years, it will hopefully whet the appetites of lighthouse lovers to visit this little gem,” said PCLC President Rich Norgard. “Of course, to be featured in this way – photographed along with the ‘big boys’ – is a real treat for us in the Conservancy.”

Zapatka has published two books featuring his lighthouse photography, “Stars & Lights: Darkest of Dark Nights,” and “USA Stars & Lights: Portraits from the Dark.” Prints of his photos can be purchased at www.starsandlighthouses.com.