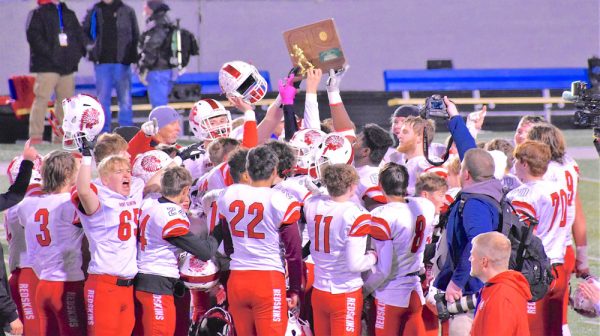 FINDLAY — The final score on Friday night wasn’t indicative of just how competitive of a game it was. Port Clinton, the No. 4 seed in Region 14, made the plays when it mattered most, though, defeating defending Division IV state champion and third-seeded Van Wert Cougars, 49-21, in the regional final.

The Redskins answered the call, almost scoring at will and coming up with key defensive stops while benefiting from some Van Wert miscues.

With a little razzle-dazzle, Cashes Jackson (13) gets ready to catch a backward pass from Port Clinton quarterback Cam Gillum. Jackson would quickly throw downfield to Josh Hurst, who was well behind the defense for the 34-yard touchdown. (Photo by Kira Lucero)

The Fighting Irish defeated West Branch, 64-35, to advance to the Final Four. The game will be played at 7 p.m. on Friday at Euclid High School.

Garrett Cornell was the star of the game, carrying the ball 30 times for 206 yards and two touchdowns, and made some key plays at linebacker, too. He ran behind one of the area’s best offensive lines, a unit that consists of center Dylan Snyder, guards Samari Smith and Hunter Shell and tackles Gabe Scott and Ethan Ranzenberger.

There were others who played at a high level on a grand stage and came up with big plays, guys like Cam Gillum, Josh Hurst, Cashes Jackson and Tyler Webb.

It wasn’t a perfect game by any means, but it was a complete game for Port Clinton, which improved to 13-1. The ’Skins offense was able to run the ball with success, and hit on some big plays. The ‘Skins defense made the plays when it was needed most, forcing three turnovers and holding a dynamic Cougar offense in check. 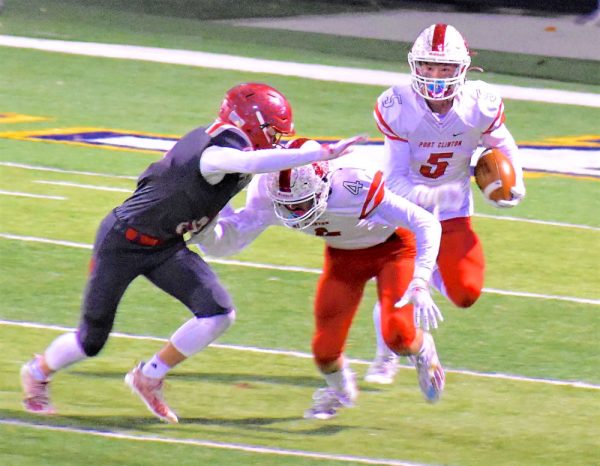 Van Wert (12-2) scored on a 1-yard touchdown run by quarterback Aiden Pratt and tied the score early in the second quarter, but Port Clinton responded with two touchdowns to take the lead for good.

The next Redskin touchdown came on a 2-yard run by Gillum with 7:59 to play in the first half. It was set up by a 58-yard pass from Gillum to Webb, who had four catches for 80 yards, which got the ball to the 2. Less than a minute later, Jackson forced a fumble that Hurst recovered, and on the next play, Jackson took a backward pass from Gillum that he threw to Hurst, who was well behind the defense for the 34-yard touchdown.

“It was Coach Carmon’s idea. We like to put in a trick play every week,” said Hurst, who caught seven passes for 119 yards and two touchdowns. “Defensive coordinator Phil Fought likes to put in a few, too. We ran it on Sandusky last year. We saw No. 3 and No. 9 were aggressive on the run. We practiced it in practice and we were emphasizing to Cash to not overthrow it.”

Port Clinton took a 21-7 lead into the half, and Trey Laudick took an 85-yard kickoff return for a touchdown on the first play of the second half for the Cougars, cutting the lead to 21-14. The teams traded touchdowns, but the ‘Skins, holding a 28-21 advantage, scored on a 1-yard run by Gillum and slowly pulled away. Cornell set up the touchdown by running for 29 yards on second-and-five at the Van Wert 36. 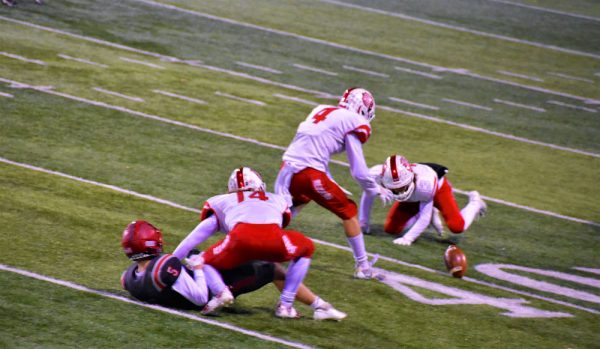 The Port Clinton defense made the plays when it was needed most, forcing three turnovers and holding a dynamic Cougar offense in check. (Photo by Kira Lucero)

Port Clinton had over 500 yards of total offense with a nice balance between the run and the pass.

“We knew we had to control the clock, that they were one step ahead of us on offense. When you give the ball to the other team, those possessions are crucial,” said Hurst. “We had some big momentum plays that got us scores off turnovers. Coach Carmon does a phenomenal job of installing the game plans and adjusting plays to give our playmakers the ability to dominate.”

Last year, the Cougars defeated the ‘Skins, 46-20, in the second round of the playoffs.

“Coach Carmon implemented a lot of what Van Wert did to us last year. Last year, playing them was a blessing in disguise. We had a game plan that got switched and then it switched back (to the original),” said Hurst. “We liked it when they were in an empty set — you had to trust that the player next to you is going to make the play. We all trust each other, we wrap up, we all have experience, we’ve been here before. Almost every person except for maybe Dagan (Meyers) and Samari (Smith) has played at least two years and had some sort of experience factor.”

Port Clinton (13-1) advances to play Youngstown Ursuline (10-3) on Friday night, a perennial power in Northeast Ohio. The Fighting Irish defeated West Branch, 64-35, to advance to the Final Four against Port Clinton. Friday’s game will be played at 7 p.m. at Euclid Community Stadium in Euclid, an inner ring suburb of Cleveland in Cuyahoga County.