“I am humbled and grateful, and want to thank the great men and women I’ve been honored to work alongside on the Ohio Northern Border Initiative, the project that brings this honor,” said Martin, 53. “The idea behind its creation in 2007, was the evolution of an initiative — which continues today — designed to help local agencies recognize the need for homeland security.”

Martin said he was often a cheerleader in wrangling local agencies to join the Ohio Northern Border Initiative. He’s proud 58 agencies that signed on, and are doing the nuts and bolts work to make it highly successful.

Martin participated in marine, land and aircraft patrols, helped develop detection practices to assure radiological and nuclear protection and lobby for sophisticated equipment to aid in their mission.

“Our focus of the initiative was not immigration issues, but rather homeland security issues,” said Martin, who has worked the Ohio shoreline and its boundary waters with Canada. “The success of the Ohio Northern Border Initiative has been an increase in the number of officers who strengthen our border security, even before the U.S. Border Patrol had a station here in Port Clinton.

“The initiative was funded through the Dept. of Homeland Security-Customs and Border Protection’s Operation Stonegarden grant program, which enhanced cooperation and coordination among Customs and Border Protection, the U.S. Border Patrol and local, state and federal law enforcement agencies. It was a joint effort to secure U.S. borders along routes of ingress from international borders, including travel corridors in states bordering Canada.”

Martin has worked for a variety of law enforcement agencies over the past three decades. He was named Port Clinton’s safety-service director in October 2017 because of his strong administrative background, said Mayor Hugh Wheeler Jr., and has become a major cog of city government.

Martin has been a fan of Lake Erie since spending his summers on Lake Erie, where his family boated from the Marblehead Peninsula in the early 1960s.

“Since I was six years old, I’ve loved boating and fishing on Lake Erie,” he said. “Doing law enforcement work in the area, I lived  on my boat at Port Clinton area marinas when I was working five days a week in Port Clinton over a five-year period. Few things are enjoyable as firing up the boat after work and heading to the Lake Erie Islands for some relaxation.”

The Homeland Heroes Awards are among the most comprehensive recognition given to federal, state and local people and teams for their dedication to the communities they serve. Nominations for the 24 awards were submitted from across the country by officials in the homeland security community as a way of recognizing their peers as heroes diligently working toward missions every day to forward the security of their communities, said officials. Martin and the other award winners will be honored at the Government Technologies & Services Coalition annual event in Arlington, Va. 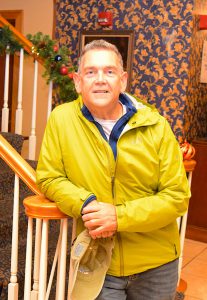