The Rockets return one of the area’s  top players in All-Ohioan Logan Harris, a 6-1 senior post who has committed  to play collegiately at the University of Findlay. Harris, the SBC Bay Division’s  Most Outstanding Player last year, aver- aged 18.8 points and 8.8 rebounds. The  other returning starting is Sophia Eli, a 5-6 junior guard, who averaged 10.7 points and 4.2 rebounds.

Tom Kontak, who has accumulated a 116-32 (.784) record in six seasons at Oak  Harbor, said “this team will be a combination of talent and inexperience.  We are excited to return Logan Harris  and Sophia Eli,” Kontak said. “The remaining roster of contributing players,  however, will take time to establish and develop.

“The main strengths are being able to score in the post while also having players who can handle the ball on the  perimeter. Another plus is having intelligent student-athletes both on and off  the court. They have an above-average I.Q. sense for the game.”

The team lost some good players in Abby Dornbusch, a four-year starter at point guard, and Ashley Riley, one of the league’s best shooters. Emily Lenke also  played a key role on the team.

It is a talented team, but it lacks the  collective experience that many of Kontak’s previous teams had. He notes that  communication, especially on the defensive end, will be key to the club’s suc-cess.

“As a program, we continue to strive to get better trying to figure it out. And that working as one on the court, we can become a team our fans and school are proud to watch compete.” 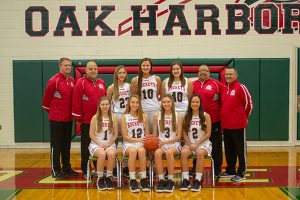