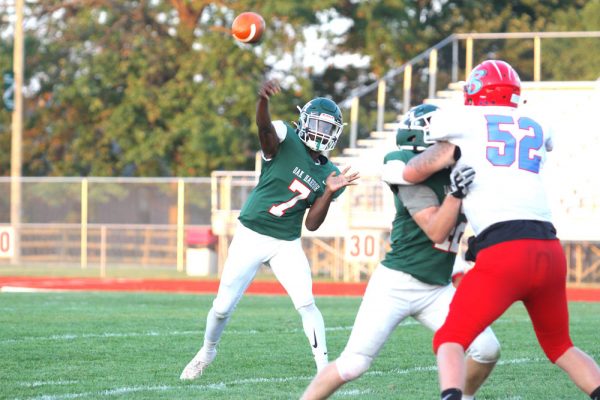 Oak Harbor quarterback Mason Wagner gets off a pass in a 50-15 victory over Toledo Bowsher. (Photo by Julie Overmyer)

Toledo Bowsher’s Xavier Bradley recovered a fumble and returned it 47 yards for a touchdown to open the scoring, but Oak Harbor recovered and scored 50 consecutive points to defeat the Blue Racers, 50-15.

In less than two minutes, the Rockets (3-2) scored two touchdowns and had a safety to take a 16-7 lead, with Dalton Witter scoring on two runs (31, 35) and Hayden Buhro returning a punt eight yards for a score off a blocked kick just before the end of the first quarter.

Witter had a 6-yard touchdown run in the second quarter to give Oak Harbor a 29-7 lead, and the Rockets never looked back.

Witter rushed nine times for 121 yards and three touchdowns. The Rockets rushed for 288 yards and controlled things after the early turnover that turned into a touchdown for Bowsher. Witter and Carson Ridener have played two games in a row after missing out on playing Rossford in week three. Ridener rushed five times for 25 yards and a touchdown and Caiden Lippus carried the ball four times for 63 yards and a score. 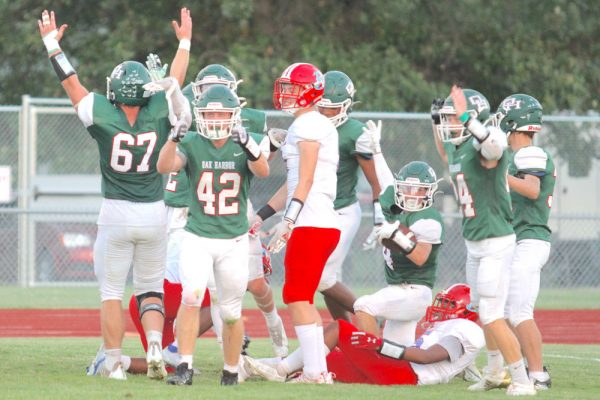 Hayden Buhro of Oak Harbor returned a punt eight yards for a score off a blocked punt just before the end of the first quarter. (Photo by Julie Overmyer)

“Dalton had a good game, rushing for 120 yards and scoring three touchdowns,” said Oak Harbor coach Mike May. “He ran hard and did a great job getting yards after contact. He is getting better every week.

“Dalton and Carson give us a nice 1-2 punch at tailback. They share the carries, which helps them to stay fresh going into the fourth quarter. It is exciting for us that they are playing well and are both young. Dalton is a sophomore and Carson is a freshman.”

May credited the men up front for their efforts.

“Our offensive line and fullback did a great job opening holes for our backs,” he said. “We had to reshuffle our offensive line in recent weeks due to some guys being out. The guys that have stepped in are playing well and as a group, they are really starting to come together.”

“I thought our defense played well. They were aggressive and ran to the ball. The defense made a big stop right before halftime after we threw an interception,” said May. “They kept Bowsher from getting momentum before the half. Jack Zeitzheim is the leader of our offense and is a three-year starter at inside linebacker. He is playing at a high level right now and is making everyone around him better.”