Rockets strong in the trenches this season 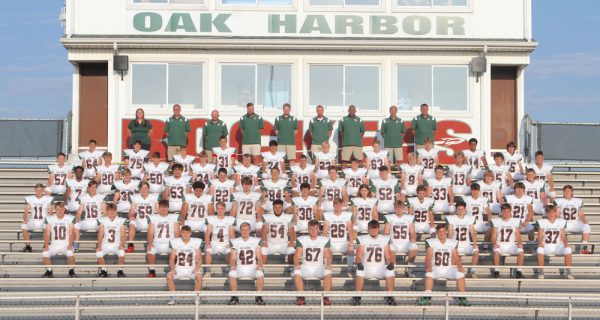 Outlook: Oak Harbor coach Mike May likes the men he has in the trenches, but his team has some nice skill-position players as well.

“We have Schiets and Snow back, they were starters on both sides last year,” said May. “(The linemen) really hit the weight room in the offseason. Gavin Bolyard is about 250 pounds, he’s a really strong kid. We also have some pretty good young linemen that can give us some depth.”

Jaqui Hayward, who moved to Oak Harbor from Toledo, is competing against Tait Dusseau at quarterback.

“We’re not sure yet who our quarterback is going to be,” said May. “Jaqui has been getting the most reps.”

Joining one of them in the backfield will be three players battling it out for two spots — Dalton Witter, Robby Jacobsen and Carson Ridener. They’ll be tasked with replacing the production from Ryan Ridener and Collin Fauver, who combined to rush for 897 yards and 12 touchdowns last season.

But May is confident about his new running backs.

“We really like our depth at tailback,” he said. “It’s one of our strengths.”

As a whole, the Rockets return eight starters, including five on the defense.

Oak Harbor’s rather inexperienced roster had some growing pains in its scrimmage with Bellevue.

“It was tough, our inexperience showed,” May said. “Offensively, we only have two starters back that saw much time last year.”

But May likes what he’s seen during two-a-day workouts thus far.

“The kids are working hard. Our numbers are up, so that’s good,” he said. “I’ve been pleased with our progress so far.”

The defense, meanwhile, operates out of the 4-2-5 alignment.

Schiets and Snow are the defensive tackles, and Bolyard and Lindsay could see some time there as well. Clune and Evan Hall are the ends. Jack Zeitzheim, a three-year starter, joins Witter as the middle linebackers, and Jacobsen and Ridener are the outside linebackers. Petersen is the safety and Buhrow will be one of the cornerbacks. Overmyer, Hower and Durdel are fighting it out to see who the other cornerback will be.

Petersen will be the kicker and Durdel handles the punting duties.

“Cade has shown that he can put it into the end zone consistently for us,” said May.

The Sandusky Bay Conference Bay Division should be quite good, as it usually is. Last year, Huron, Edison and Port Clinton combined to win 19 games in the shortened season. Vermilion and Willard are the other teams in the division.

“I think it’s very competitive. I think it’s wide open. I don’t want to leave anyone out,” May said. “There are a number of teams that could win the division.”

The last three years have been good to Oak Harbor, which went a combined 28-7 during the span, winning a regional championship, two Bay Division titles and going 6-3 in the playoffs.

The Rockets will face Fostoria to begin the season and Genoa, Rossford, Woodward and Bowsher in the non-conference portion of the schedule.