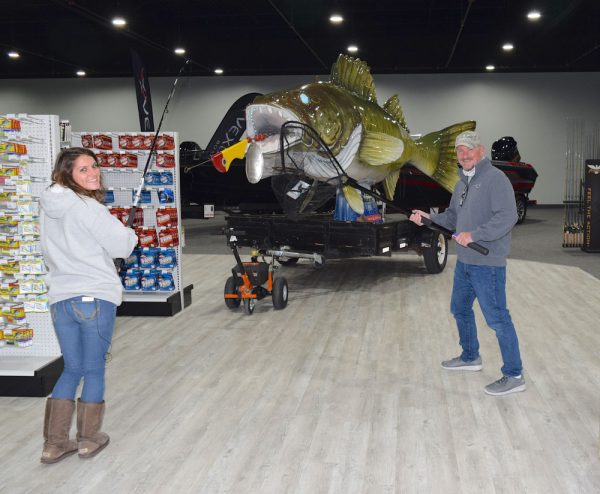 Fishermens Central Partner Danielle Perry has her hands full after hooking Wylie the Walleye, and President Dan Blackert might find his landing net a bit too small to handle Port Clinton’s favorite fish. Wylie will be available for photographs now through New Year’s Eve at Fishermans Central in Port Clinton. (Photo by D’Arcy Patrick Egan)

With a new premier sponsor in Fishermans Central and a unique virtual broadcast on New Year’s Eve that will be beamed to a global audience, Wylie the Walleye will make his 23rd annual Walleye Drop in Port Clinton. It will be an epic trip via the cameras of Nick James Productions.

The global coronavirus pandemic has radically changed the way New Year’s Eve and the Walleye Drop will be celebrated this year. The popular event has been forced to eliminate the typical New Year’s Eve crowds in downtown Port Clinton. The virtual celebration, though, will be beamed around the world, and will still feature Lake Erie’s favorite fish.

“We’re delighted to be a part of the Walleye Drop celebration, as well as the outstanding sport fishing on Lake Erie this year,” said President Dan Blackert of Fishermans Central, which debuted its Port Clinton fishing headquarters last spring in the Knoll Crest Shopping Center. Fishermans Central also has a tackle store in the Portage Lakes area in New Franklin, Ohio, near Akron. The shops an angling destination for fishermen from around the country.

The virtual Walleye Drop will be beamed on www.walleyedrop.com on New Year’s Eve from 9 p.m. to 12:30 a.m., followed by a virtual fireworks show. Wylie the Walleye, a huge, colorful character that is 20 feet long and weighs 200 pounds, featuring a dazzling array of lights, will again be the star, as well as such live entertainment as Miss Kitty and the Litter, a popular local band.

“We’ll have programming from Port Clinton’s Ida Rupp Library starting at noon on New Year’s Eve on walleyedrop.com, as well as special raffles and Walleye Drop souvenirs and clothing,” said Kristina Willoughby. “We encourage people to donate to the Wylie Walleye Foundation to support our many sponsors, charities and the tourism industry in the area.”

Wylie the Walleye is also available for photographs at Fishermen Central in Port Clinton from now through the Walleye Drop. Store hours are 10 a.m.-8 p.m. on Monday; 9 a.m.-6 p.m. on Tuesday through Friday; and 9 a.m.-4 p.m. on Saturday.

“Fishermen around the country and the world know Lake Erie is the premier walleye lake in the world for walleye,” said Blackert. “It’s also one of the top locations for smallmouth and largemouth bass, yellow perch, steelhead trout and more. And you won’t find a more extensive selection of fishing tackle, lures and fishing boats than at Fishermans Central.”